Global central banks this week will offer the biggest collective assessment of a changed world since Russia’s invasion of Ukraine sparked renewed supply disruptions and a sudden inflation shock for many economies.

Among the eight members of the Group of 20 whose monetary officials are due to meet, the Federal Reserve’s impending interest-rate increase is likely to steal the limelight.

The others will display a kaleidoscope of policy reflecting differing impacts from the conflict in a world economy already adjusting to surging prices. Decisions will range from another potential rate hike at the Hawkish Bank of England, to the Bank of Japan’s likely outcome of insisting on a continued easing stance. Those announcements follow in the wake of the European Central Bank’s surprise decision last week to accelerate a wind-down of stimulus, leaving investors wondering what other shifts might be in store.

What follows next is a run-down of the major monetary meetings of the coming week. 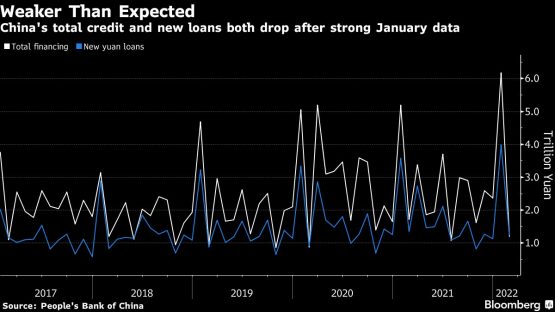 First up, on Tuesday, is the People’s Bank of China. Analysts are watching closely whether a key rate will be cut for the second time this year.

While activity data in January and February likely showed mild improvement, risks are looming as geopolitical tensions worsen and oil prices spike. Beijing’s new growth target of about 5.5% this year may also imply the need for central-bank support.

China’s total credit and new loans both drop after strong January data
Adding to the case for monetary loosening, China’s credit expansion slowed in February as a long holiday and the slumping housing market meant people and companies borrowed less.

“We expect the PBOC to cut the required reserve ratio further to free up more cash for banks to lend and then lower interest rates to strengthen the stimulus.” – David Qu, economist.

The Fed takes center stage on Wednesday. An expected quarter-point increase in the benchmark rate would be the first since 2018. Chair Jerome Powell is having to balance the hottest inflation in four decades and uncertainty tied to the war.

Data in the past week showed consumer prices soared 7.9% in February from a year earlier, and inflation is poised to rise even further as commodities cost rise. On the eve of the Fed decision, investors will get another key data point, with a sizeable increase likely in the producer price index. Against a backdrop of inflation well above the Fed’s 2% goal, tightness in the labor market is driving up wages – another tailwind for price pressures.

In addition to raising rates, the Fed plans to shrink its nearly $ 9 trillion balance sheet later in 2022 after completing purchases this month that were intended to provide support to the economy during the pandemic.

After the Fed on Wednesday, Brazil’s central bank is expected to raise its key rate for a ninth straight meeting, to 11.75%. That’s up from just 2% a year ago. Just a month ago, traders and analysts in Brazil were forecasting that the hiking cycle would top out at roughly 12.25%, but it’s now seen to be as high as 13.75%. For an economy that’s forecast to barely expand this year, that’s a bitter pill to swallow.

“We continue to expect a 100-basis-point increase next week, but acknowledge significant upside risks the terminal rate will top our 12.25% forecast.” – Adriana Dupita, economist. For full analysis, click here

On Thursday the focus shifts to Bank Indonesia, which will consider risks from commodities and food costs at a decision expected to keep rates unchanged.

The central bank recently said it’s watching for a buildup in imported inflation, even though it sees consumer prices as relatively manageable. Both headline and core gauges in February stayed at the lower end of its 2% -4% target, while the government has pledged to keep a lid on volatile food costs.

Faster-than-expected price pressures could affect Bank Indonesia’s hiking timeline, though, with economists seeing a liftoff in the second half of this year. Meanwhile, the commodities boom has helped counter selling pressure on the rupiah as its export volumes and values ​​remain robust.

What Bloomberg Economics Says:
“Bank Indonesia will leave its 7-day reverse repo rate unchanged, in our view. The rupiah and core inflation suggest there is still time to let the recovery to gain more traction. ”

Later on Thursday, Turkey’s central bank will probably keep its rate at 14%, conforming to President Recep Tayyip Erdogan’s unorthodox approach that favors looser policy rather than tightening to quell inflation that’s at a 20-year high.

The pace of annual consumer-price gains reached 54% in February, stoked by energy and food, and the global impact of the war could drive such pressures even further.

That would threaten to prolong a cost-of-living squeeze faced by Turkish households, a narrative that may become more pressing as country approaches elections in 2023.

“Inflation is at a 20-year high and Russia’s invasion of Ukraine will probably keep it elevated. But raising interest rates isn’t politically viable. ”

Shortly after Turkey’s decision, the BOE looks all but certain to take its key interest rate back to its pre-Covid level, the first major central bank to achieve that milestone.

Faced with a worsening inflation outlook that Bloomberg Economics says could push inflation to 10% later this year, officials are expected to increase their benchmark to 0.75%. With the UK also in the grips of a cost-of-living crisis, some economists predict a minority of officials will again push for an unprecedented 50-basis-point increase. 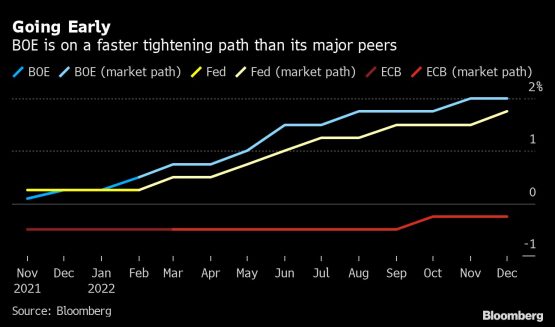 A hike of any kind would mark the third straight increase, a pace unseen this century. Markets also expect policy makers, led by Governor Andrew Bailey, to signal that more moves are coming. Investors are currently pricing in rates hitting 2% by the end of the year.

“Beyond this month, we expect the scale of tightening to be curtailed by concern about the economic impact of the war on Ukraine. The risk to our view is that high inflation readings this year alarm the BOE. ” –Dan Hanson, senior UK economist. For full analysis, click here

With inflation still far behind the accelerating levels in much of the world, the BOJ is expected to keep all settings unchanged on Friday and stick with messaging that domestic price growth is still too feeble.

The communication task is getting harder, however. Governor Haruhiko Kuroda and colleagues have recently emphasized the importance of stronger wage growth to ensure inflation forms part of a virtuous growth cycle. The takeaway is that monetary easing must continue for longer.

But even the BOJ is recognizing that higher oil prices are already pushing inflation beyond its forecasts, according to people familiar with the matter.

Adding to the pain for households and businesses, the yen hit its weakest level in more than five years on Friday after the ECB’s surprisingly hawkish move and the acceleration of US inflation. Further softening will put Japan in an increasingly awkward spot.

“Two factors are shifting Japan’s growth and inflation dynamics – the Russia-Ukraine war and extended virus restrictions. Our focus will be on the BOJ’s assessment and any guidance it gives. ”

The week ends with the Bank of Russia’s first regular interest-rate meeting since the invasion of Ukraine led to harsh sanctions and the seizure of a large portion of its more than $ 640 billion in foreign reserves.

There’s a case for officials to keep monetary settings unchanged and monitor developments after already more than doubling the key rate to 20% on Feb. 28. That was one in a series of defensive measures trying to limit panic selling of Russian assets including the ruble, which plunged more than 35% in less than a month. 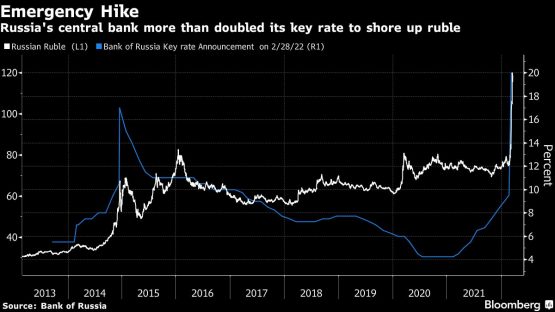 The country’s slumping currency and disrupted trade outlook is pushing consumer prices toward one of the biggest spikes of this century. In the first full week since Russia’s invasion, inflation reached 2.2%. That’s the biggest increase since statisticians started tracking the data in 2008, and more than double a previous record.

“A spike in inflation has already fled and there isn’t much more that monetary policy can now do to contain it.”