Russia’s siege of Mariupol has killed almost 5 000 people, including 200 children, as of Sunday, its mayor said, and roughly a third of the pre-war population remains in the city.

Russia’s Novaya Gazeta, whose Editor-in-Chief Dmitry Muratov was co-winner of the 2021 Nobel Peace Prize, is suspending operations after receiving a second warning from government censors.

Ukrainian and Russian negotiating teams plan to meet in Turkey Tuesday with big differences remaining on terms for a potential cease-fire after more than a month of fighting. Credit Suisse Group AG and Abu Dhabi’s wealth fund will stop investing in Russia, while beer makers Carlsberg A/S and Heineken NV announced plans to exit the country.

The Sea of Azov port city has been under attack since March 1, and 90% of its residential houses and hospitals — including all maternity wards — have been damaged or destroyed by Russian shelling and air and missile strikes, Boychenko said.

Of Mariupol’s pre-war population, about 170,000 people remain. Some 140,000 left before the siege and 150,000 during the attacks. Russian troops, which control part of the city, deported 30,000 citizens to unknown destinations, Boychenko said.

Poland, which has accepted around 2.3 million refugees from Ukraine, estimates that about half a million people have moved on to other destinations, Polish President Andrzej Duda said. The population of Poland’s capital, Warsaw, has swelled by 300,000, or about 20% — alone, in four weeks, and accommodation is running out.

The European Union nation has set aside 8 billion zloty ($1.9 billion) to help refugees find work, gain access to schools and health care and pay those who host them in their homes. Until last month, the country of 38 million people was already home to roughly 1 million Ukrainians who fled the separatist conflict in the east of their country that started in 2014.

The Abu Dhabi sovereign wealth fund Mubadala, one of the world’s largest, is pausing investments in Russia because of the war in Ukraine, CEO Khaldoon Al Mubarak said.

Mubadala is the first Middle Eastern sovereign wealth fund to offer public comments on the month-old war, and its decision is a sign that the war in Ukraine is complicating ties between Moscow and the United Arab Emirates. Previously, Norway’s $1.3 trillion sovereign wealth fund decided to drop Russian assets in response to the invasion.

Romania’s Navy destroyed a mine that was spotted drifting by fishermen in the Black Sea some 70 kilometers from land on Monday morning, the country’s Defense Ministry said in a statement.

Turkey detected a sea mine off Igneada’s Black Sea coast near the Bulgarian border, the Defense Ministry said in a tweet. Underwater defense units retrieved the mine and de-activated it. Another mine was detected on Saturday around the Bosporus strait, halting ship traffic for five hours.

Carlsberg, which owns the biggest brewery in Russia, and Heineken announced they would leave the country.

Carlsberg said in a statement the decision to sell its Russian business “is the right thing to do.” Earlier Monday, Heineken said it expected impairment and other charges to amount to some 400 million euros in announcing plans to sell its business and exit Russia.

EU member states will have about 17 billion euros ($18.6 billion) available to finance their help to refugees, of which more than 3.8 million have crossed the bloc’s border, according to an EU diplomat.

Precious metals miner Polymetal is considering separating its Russian business to protect its international operations from the effect of war-related sanctions, the Financial Times reported, citing two people familiar with the matter.

Polymetal’s Russian and Kazakh businesses could get their own listing, the people told the FT, adding that discussions are ongoing. The company told the FT a demerger of its international assets was being “evaluated.”

Credit Suisse Group AG has stopped pursuing new business in Russia and is cutting its exposure to the country as a result of the invasion of Ukraine, according to an internal document seen by Bloomberg.

The Swiss bank is also helping its clients unwind their Russia exposure, according to the memo. The bank added that it has moved roles out of the country and is helping employees relocate elsewhere. A spokesperson for Credit Suisse confirmed the content of the document.

Russia signaled its intention to make coupon and principal payments for bonds due next month and in April 2042, according to filings with the National Settlement Depository.

Russia’s Novaya Gazeta newspaper announced on Twitter it is suspending publication “until the completion of the ‘special operation’ in Ukraine.”

Novaya Gazeta Monday received a second warning from Russian censor Roskomnadzor for posting material from a so-called foreign agent without the appropriate labeling.

Russian stocks retreated on Monday, erasing gains from last week as trading was expanded to all Moscow shares, while government measures to prevent a deeper selloff remain in place. 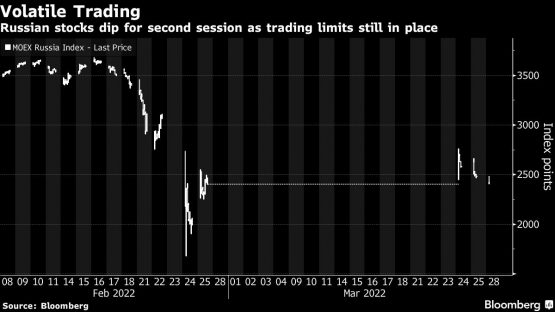 The Russian government is taking steps to stabilize imports after a significant drop in recent weeks by overhauling customs procedures and building new supply chains, Economy Minister Maxim Reshetnikov said, according to Interfax.

Imports will halve and the Russian economy will shrink by about 10% this year, the Bank of Finland Institute for Emerging Economies said Monday in its revised 2022-2023 forecasts for Russia.

The European Commission urged member states to immediately repeal any existing “golden passport” schemes. The 27-nation EU’s executive also asked national governments to assess whether citizenship previously granted to Russian or Belarussian nationals on the EU sanction list in connection to the war in Ukraine should be withdrawn.

Biden clarified comments he made in Warsaw at the weekend that the Russian president “cannot remain in power,” saying that he was not advocating regime change.

Talks in Turkey will start at 10 a.m. Tuesday, Interfax newswire reported, citing Ukrainian negotiator David Arakhamiya. Both sides will arrive later on Monday as logistics are “difficult,” it said. Arakhamiya had previously suggested the latest round of talks may begin on Monday.

Ukrainian presidential adviser Mykhailo Podolyak called for a “sharp increase” in supplies of artillery shells to keep up its attacks on Russian forces. Russia said on Friday that 1,351 servicemen had been killed and 3,825 wounded since the start of the war on Feb. 24. NATO estimated Russian combat deaths as at least 7,000 and as high as 15,000, according to alliance officials last week.

510-530 Russian soldiers are killed daily. This indicates the high intensity of hostilities & motivation of military. In order to double/triple the number of irretrievable losses for RF, we need a sharp increase in the supplies of shells to heavy & long-range artillery systems

China rejected speculation that it might try to get around international sanctions on Russia, while complaining that the penalties had hurt its trade relations with Moscow. “The current issue is not any country wanting to help Russia circumvent the sanctions, but rather there has been unnecessary damage to the normal trade exchange with Russia, including between China and Russia,” Foreign Ministry spokesman Wang Wenbin told a regular news briefing in Beijing.

China has failed to condemn Russia for its invasion, even as it voices support for Ukraine’s sovereignty. Bloomberg News reported last week that Chinese companies and government officials were rushing to find out how to comply with U.S. sanctions on Russia.

The U.K. government told public bodies including government departments and hospitals to identify any contracts with Russian and Belarusian companies and, “if possible to switch suppliers with minimal disruption, pursue legal routes of cancelling them.”

The announcement related to the public sector follows private companies from brewers to carmakers that have pulled out of Russia.

No humanitarian corridors will open in Ukraine due to information about planned provocations along the routes, Ukrainian Deputy Prime Minister Iryna Vereshchuk said in a video statement.

While Ukraine says that Russia regularly breaches agreements to allow safe passage for civilians, humanitarian corridors have operated on most days since the early days of the war. Ukrainian authorities had expected to continue evacuations from the besieged port city of Mariupol on Monday and to open corridors in the northeastern Sumy region.

Wheat futures tumbled the most in more than a week on signs that global supply may not be as constrained as some had feared in the immediate aftermath of the Russian invasion of Ukraine. Crude oil retreated, with Brent futures down more than 3% as China’s worsening virus resurgence raised demand concerns. Crude is still poised for a fourth monthly gain after Russia’s war roiled markets. Natural gas in Europe declined for a third day.

Russian Foreign Minister Sergei Lavrov is due in New Delhi this week, The Hindu newspaper reported, citing unnamed officials. Russian and Indian officials are expected to discuss the sale of Russian oil to India and to work on a rupee-ruble denominated payment method that could operate outside the SWIFT messaging system, it said.

India has yet to condemn Russia’s war on Ukraine, and is under pressure from fellow members of the Quad group, which includes the U.S., Australia and Japan, to take a stronger stance against Moscow. Russia is subject to international sanctions that include barring many banks’ access to SWIFT.

Europe is racing to absorb the more than 3.4 million refugees that have fled Ukraine, with many more on their way. European Union justice and home affairs ministers are in Brussels for a meeting to determine how much more funding is needed and to help facilitate travel of refugees to other nations in the bloc.

The EU has already expedited 3.4 billion euros for front-line states, particularly Poland. Another topic is how to handle Ukrainian refugees transiting through Moldova.