The deepening bond-market selloff has driven Treasury yields past a threshold that could signal the end of a decades-long bull run.

With the Federal Reserve poised for an aggressive cycle of interest-rate hikes, 10-year yields have surged to nearly 2.5%, the highest since May 2019 and up more than a full-percentage point since early December. That’s a far faster and steeper increase than before other monetary-policy tightening cycles, and it has already driven the benchmark yield past a technical trend line that has effectively served as a ceiling since the late 1980s. The 10-year yield has tested the threshold before only to snap back each time, rewarding investors who saw it as a buying opportunity and burning bears who thought it signaled the market was finally past its peak. It’s possible such a pull-back may happen again.

But with the Fed now facing the biggest inflationary surge since the 1980s, wages rising in a tight labor market, and Russia’s Ukraine war dealing fresh commodity-price shocks, a growing chorus on Wall Street is predicting that yields will continue to rise as the central bank steadily raises rates in the months ahead. The 10-year rate has particularly broad impacts, as it serves as a key benchmark for longer-term consumer and corporate loans.

“There is a scenario that the trend breaks for good,” said George Goncalves, head of the US macro strategy MUFG. “The real risk at the moment is that the market gaps out to 2.60%, and perhaps even 2.8%, because there is so much uncertainty about inflation and the Fed’s reaction function.”

Goldman Sachs Group Inc. marked up its forecast for Treasury yields across the curve, anticipating half-percentage-point hikes at the Fed’s next two meetings. Citigroup Inc. predicted four such hikes in succession. By Friday, the hawkish outlook became the consensus: futures were pricing in about two full percentage points of interest-rate increases over the next six meetings.

In the past, long-term yields did not peak until toward the end of tightening cycles. That suggests they still have far to go, despite a jump that’s already set to hit bondholders with the steepest quarterly losses on record.

Fed Chair Jerome Powell added fuel to the selloff on Monday, when he said the bank was prepared to enact larger rate increases at upcoming meetings if warranted, a sentiment echoed by other officials. James Bullard, the president of the Federal Reserve Bank of St. Louis said he saw a template in the bank’s path in 1994, when it raised rates as much as 75 basis points at one meeting. The Fed may also put additional upward pressure on long-term bond yields when it starts paring back its massive securities holdings, a step known as quantitative tightening. 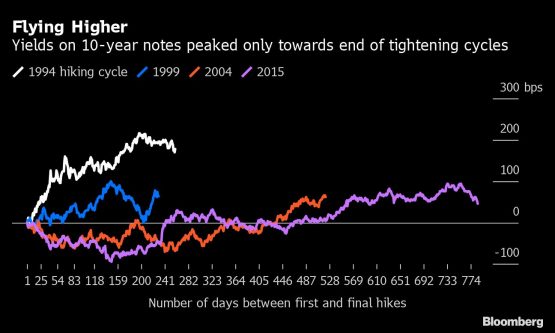 Data released in the coming week will provide clues to the outlook. On March 31, the price index for February personal consumption expenditures is forecast to show a year-on-year increase of 6.4%. On April 1, the monthly jobs report is anticipated to show solid payroll growth, declining unemployment and an acceleration in annual wage growth to 5.5%.

But she does expect some stabilization in the near term as higher yields draw in buyers. “The market can overshoot, but 3% on the 10-year is not the next step,” she said. “Better two-way flow develops between 2.5% to 2.75%, as that is an attractive area for investors who need fixed income in their portfolios, such as US pension funds.”

A test of buyer sentiment for shorter-dated debt will come in the upcoming week with the sale of two, five- and seven-year notes.

“This does seem like a time to take the opposing view and buy Treasuries, but investors have low conviction after many months of losses,” said MUFG’s Goncalves. “Until inflation turns and the Fed is less hawkish, yields can remain elevated and suggest a reversal of the long-term trend remains in place.”