Traders are betting on an outsized SA rate increase

Traders are adding bets on an outsized interest-rate increase in South Africa later this month as the surge in the price of crude oil fuels inflation expectations.

Forward-rate agreements kicking in after the next monetary policy committee meeting on March 24 are pricing in a rate increase of 41 basis points, or an 82% chance of a 50-basis-point hike, compared to 32 basis points two weeks ago. The South African Reserve Bank has not increased its benchmark rate by more than a quarter point since January 2016.

The market is pricing in 234 basis points of increases over the next 12 months, up from 175 three weeks ago. Investors are betting the central bank will have to respond to price pressures fueled by the rising oil price. 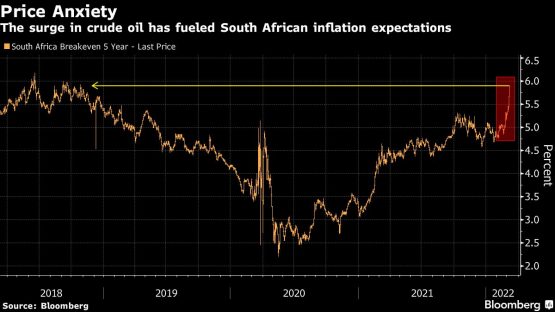 Investors’ inflation expectations as measured by the five-year break-even rate climbed to the highest in more than three years on Monday as Brent crude oil topped $ 120 a barrel. South Africa’s fuel price is benchmarked against the rand price of Brent crude, and is already at a record high.

A recent study by a central-bank economist found that a 10% rise in the gasoline price adds 1.2 percentage points to the headline inflation rate.