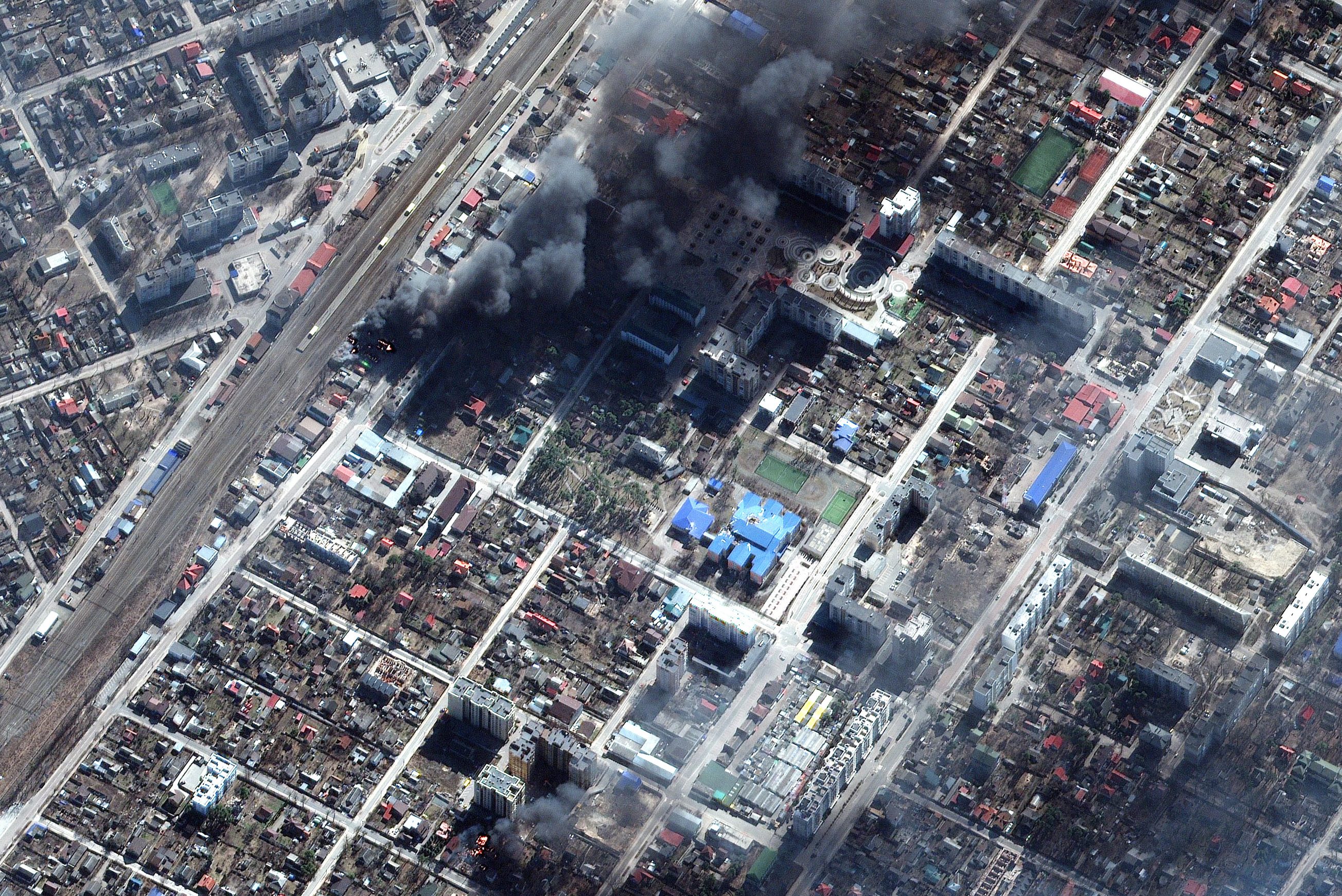 What is interesting about both early and current visions of urban sensing networks and the use that could be made of the data they produced is how close to and yet how far away they are from Constant’s concept of what such technologies would bring about. New Babylon’s technological imagery was a vision of a smart city not marked, like IBM’s, by large-scale data extraction to increase revenue streams through everything from parking and shopping to health care and utility monitoring. New Babylon was unequivocally anticapitalist; it was formed by the belief that pervasive and aware technologies would somehow, someday, release us from the drudgery of labor.

The apocalyptic news broadcast from Mariupol, Kharkiv, Izium, Kherson, and Kyiv since February 2022 seems remote from the smart urbanism of IBM. After all, smart sensors and sophisticated machine-learning algorithms are no match for the brute force of the unguided “dumb bombs” raining down on Ukrainian urban centers. But the horrific images from these smoldering cities should also remind us that historically, these very sensor networks and systems themselves derive from the context of war.

Unbeknownst to Constant, the very “ambient” technologies he imagined to enable the new playful citywere actually emerging in the same period his vision was taking shape — from Cold War – fueled research at the US Department of Defense. This work reached its height during the Vietnam War, when in an effort to stop supply chains flowing from north to south along the Ho Chi Minh Trail, the US Army dropped some 20,000 battery-powered wireless acoustic sensors, advancing General William Westmoreland’s vision of ” near 24-hour real- or near-real-time surveillance of all types. ” In fact, what the US Defense Advanced Research Projects Agency (DARPA) would later call “network-centric warfare” was the result of multibillion-dollar funding at MIT and Carnegie Mellon, among other elite US universities, to support research into developing distributed wireless sensor networks — the very technologies now powering “greater lethality” for the military’s smartest technology.

It is well known that technologies originally developed by DARPA, the storied agency responsible for “catalyzing the development of technologies that maintain and advance the capabilities and technical superiority of the US military” (as a congressional report put it), have been successfully repurposed for civilian use. ARPANET eventually became the Internet, while technologies such as Siri, dynamic random-access memory (DRAM), and the micro hard drive are by now features of everyday life. What is less known is that DARPA-funded technologies have also ended up in the smart city: GPS, mesh networks for smart lighting systems and energy grids, and chemical, biological, and radiological sensors, including genetically reengineered plants that can detect threats. This link between smart cities and military research is highly active today. For example, a recent DARPA research program called CASCADE (Complex Adaptive System Composition and Design Environment) explicitly compares “manned and unmanned aircraft,” which “share data and resources in real time” thanks to connections over wireless networks, to the critical infrastructure systems ”of smart cities—“ water, power, transportation, communications, and cyber. ” Both, it notes, apply the mathematical techniques of complex dynamic systems. A DARPA tweet puts this link more provocatively: “What do smart cities and air warfare have in common? The need for complex, adaptive networks. ”

Both of these visions — the sensor-studded battlefield and the instrumented, interconnected, intelligent city enabled by the technologies of distributed sensing and massive data mining — seem to lack a central ingredient: human bodies, which are always the first things to be sacrificed, whether on the battlefield or in the data extraction machinery of smart technologies.

Spaces and environments outfitted with sensor networks can now perceive environmental changes — light, temperature, humidity, sound, or motion — that move over and through a space. In this sense, networks are something akin to bodies, because they are aware of the changing environmental conditions around them — measuring, making distinctions, and reacting to these changes. But what of actual people? Is there another role for us in the smart city apart from serving as convenient repositories of data? In his 1980 book Practice of Everyday Lifethe Jesuit social historian Michel de Certeau suggested that resistance to the “celestial eye” of power from above must be met by the force of “ordinary practitioners of the city” who live “down below.”

When we assume that data is more important than the people who created it, we reduce the scope and potential of what diverse human bodies can bring to the “smart city” of the present and future. But the real “smart” city consists not only of commodity flows and information networks generating revenue streams for the likes of Cisco or Amazon. The smartness comes from the diverse human bodies of different genders, cultures, and classes whose rich, complex, and even fragile identities ultimately make the city what it is.

Chris Salter is an artist and professor of immersive arts at the Zurich University of the Arts. His newest book, Sensing Machines: How Sensors Shape Our Everyday Lifehas just been published by MIT Press.

This artist is dominating AI-generated art. And he’s not happy about it.