The list of foreign companies pulling out of Russia keeps growing

The invasion of Ukraine is causing a mass exodus of companies from Russia, reversing three decades of investment by Western and other foreign businesses there following the collapse of the Soviet Union in 1991.

The list of those cutting ties or reviewing their operations is growing by the hour as foreign governments ratchet up sanctions against Russia, close airspace to its aircraft and lock some banks out of the SWIFT money messaging system. Some companies have concluded that the risks, both reputational and financial, are too great to continue. Operating in Russia has become deeply problematic.

The ruble plunged as much as 30% on Monday after the US banned transactions with the Russian central bank, hindering its ability to deploy its $ 630 billion foreign reserves to defend the currency.

For some companies, the decision to exit Russia is the conclusion of decades of lucrative, if sometimes fraught, investments. Foreign energy majors have been pouring money in since the 1990s. Russia’s largest foreign investor, BP Plc, led the way with its surprising announcement on Sunday that it would exit its 20% stake in state-controlled Rosneft, a move that could result in a $ 25 billion write-off and cut its global oil and gas production by a third.

The stake was the product of a protracted battle in 2012 for control over TNK-BP, a joint venture between the oil giant and a group of billionaires. It’s now weighing whether to sell its stake back to Rosneft, according to people familiar with the situation. 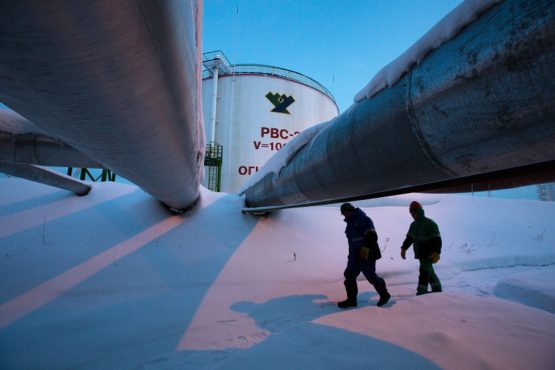 Shell Plc followed on Monday. Citing Russia’s “senseless act of military aggression,” it said it is ending partnerships with state-controlled Gazprom, including the Sakhalin-II liquefied natural gas facility and its involvement in the Nord Stream 2 pipeline project, which Germany blocked last week. Both projects are worth about $ 3 billion. Kwasi Kwarteng, the UK business secretary, met with Shell Chief Executive Officer Ben van Beurden on Monday to discuss the company’s involvement and welcomed the move.

“Shell have made the right call,” he tweeted. “There is now a strong moral imperative on British companies to isolate Russia. This invasion must be a strategic failure for Putin. ”

Equinor ASA, which is Norway’s largest energy company and majority owned by the state, also announced it will start withdrawing from its joint ventures in Russia, worth about $ 1.2 billion. “In the current situation, we regard our position as untenable,” CEO Anders Opedal said. The moves left Exxon Mobil Corp. and TotalEnergies SE as the only energy majors with significant drilling operations in Russia.

Exxon oversees Sakhalin-1 with Rosneft and companies from Japan and India, while TotalEnergies has a major stake in Novatek PJSC, the largest independent gas producer. Patrick Pouyanne, TotalEnergies CEO, said at a conference last Thursday that he did not see the rising invasion having an impact on the company’s operations because they are very far from the front. But the broader trend seems to be in the direction of pulling out, at least for now.

“I wouldn’t be surprised if you see more announcements coming down the line about exits,” said Allen Good, sector strategist at Morningstar. “BP had extra pressure given by the UK government, I’m not sure TotalEnergies will face the same pressures given that the relationship between France and Russia is different.”

When the Soviet Union fell apart, foreign companies saw enormous opportunities – a massive new market of millions of consumers as well as minerals and oil – and poured in to buy, sell and partner with Russian firms.

With Russia’s invasion of neighboring Ukraine, that trend has come to a screeching halt. Norway’s sovereign wealth fund, the largest in the world, said it is freezing Russian assets worth about $ 2.8 billion and will come up with a plan to exit by March 15.

Major law and accounting firms are also taking stock and facing potentially an enormous fallout. Baker McKenzie is so far one of the few law firms to publicly state it will sever ties with several Russian clients in order to comply with sanctions. The Chicago-headquartered firm’s clients include Russia’s finance ministry and VTB, Russia’s second largest bank, which has been hit with asset freezes and sanctions by the US, UK and European Union. The law firm said Monday it was reviewing its operations in Russia.

“We do not comment on the details of specific client relationships, but this will mean in some cases exiting relationships completely,” a Baker McKenzie spokesperson said.

London-based Linklaters said in a statement it was “reviewing all of the firm’s Russia-related work.”

Some of the largest law firms in London – including Allen & Overy and Clifford Chance – either failed to answer queries over the handling of their Russian clients or declined to comment. London courts have long been a battleground for wealthy Russians seeking to resolve disputes over business deals gone awry and failed marriages. British judges promise a justice system that affords even suspicious money a fair hearing in the event of disputes.

Other firms have come under fire for not getting out entirely. McKinsey & Co.’s global managing partner Bob Sternfels took to LinkedIn on Sunday to condemn the Russian invasion of Ukraine and declare that the firm will no longer do business with any government entity in Russia. But he is not pulling out. For some inside and outside the company, his move was insufficient.

The consultancy’s most senior executive in Ukraine called on companies to go further, and begin, where possible, shutting down “offices and outlets” in Russia, where McKinsey has operated for nearly 30 years.

And Andrei Caramitru, whose LinkedIn profile states that he was a senior partner at the firm for 16 years, tore into the McKinsey decision.

“You should be ashamed. You REFUSE to close the McKinsey office in Moscow, ”Caramitru wrote in a LinkedIn post addressed to Sternfels. “Close it down! Now! It’s blood money, on your hands, staining you with each day that you keep it open. ”

Pressure on others with sales and joint ventures in Russia is mounting. Daimler Truck Holding AG, one of the world’s largest commercial vehicle manufacturers, said it will stop its business activities in Russia until further notice and may review ties with local joint venture partner Kamaz PJSC. Labor representatives said they “consider it appropriate” for the world’s largest truck maker to also offload its shares in Kamaz, the company’s works council said in an emailed statement. Volvo Car AB and Volvo AB, the truck maker, also announced they are halting sales and production in Russia. Harley-Davidson Inc. said in a statement it has suspended its business in Russia, which along with the rest of Europe and the Middle East accounted for 31% of its motorcycle sales last year. The Milwaukee, Wisconsin-based manufacturer doesn’t break out sales to Russia alone.

General Motors Co. said it was halting shipments to Russia, citing “a number of external factors, including supply chain issues and other matters beyond the company’s control.” GM exports about 3,000 vehicles a year to Russia from the US.

Others who have said little are seeing their stock prices plummet. French carmaker Renault SA fell as much as 12% Monday on how sanctions will hurt its business in Russia, its second-biggest market. Its unit AvtoVaz, where Renault holds a 68% stake, makes Lada-brand vehicles that command about a fifth of the Russian market. Renault also makes Kaptur, Duster and other vehicles at its own plant in Moscow.

Ford Motor Co. said it wasn’t planning to pull out of its joint venture in Russia with Sollers to produce commercial vans, at least not yet. “Our current interest is entirely in the safety and well-being of people in Ukraine and the surrounding region,” Ford said in a statement. “We won’t speculate on business implications.”

Some companies are pulling out of Ukraine, not Russia, saying they have concerns over safety as the invasion proceeds. Coca-Cola said that it’s European bottling partner, Coca-Cola Hellenic Bottling Company, was immediately closing operations in Ukraine. It didn’t respond to questions regarding Russia.

“The safety of our people is our number one priority and we have enacted our contingency plans that include stopping production in Ukraine, closing our plant and asking colleagues in the country to remain at home and follow local guidance,” a Coca-Cola HBC said. spokesperson said in a statement.

In a move that will reverberate well beyond the business community, the world soccer body FIFA and the European authority UEFA banned Russian teams from games. “Football is fully united here and in full solidarity with all the people affected in Ukraine,” it said in a joint statement.

Mark McNamee, Europe director at advisory firm FrontierView, was in Moscow two weeks ago talking to executives on the potential fallout of an invasion. Many shrugged off the worst scenarios, he said, which means they weren’t necessarily prepared for what has transpired.

Many corporations will have a difficult time supporting local operations given the SWIFT ban and capital controls, he said. Firms in the energy or commodities sectors or those selling to the Russian government will face the potential risk of being perceived as “profiting from the war.”

Consumer goods companies with extensive operations and local production in Russia cannot easily get out, even if they want to, but face financial turmoil. Before the invasion last week, Danone SA, which runs Russia’s largest dairy business and has been operating in Ukraine for more than 20 years, said it was putting additional plans in place to prepare for any military escalation.

Chief Financial Officer Juergen Esser said the company was trying to buy more local ingredients for its products from both markets, where the vast majority of raw materials are already domestically sourced. Nestle also hedged its currency exposure, he said. Danone entered the Russian market three decades ago. The country accounts for about 5% of the company’s net sales, and Ukraine less than 1%. Carlsberg A / S is the largest brewer in Russia through its ownership of Baltika Breweries. The majority of Baltika’s supply chain, production and customers are based in the country, which limits the direct impact of many sanctions, a Carlsberg spokeswomen said. The company has limited exports from and imports to Russia, where Carlsberg employs 8,400 people, but it’s currently not possible to estimate the full extent of the direct or indirect consequences of sanctions, she said. It employs 1,300 workers in Ukraine, where last week it halted operations at its breweries and sent workers home.

Foreign companies could face pushback from the Russian government, which could encourage boycotts or – in an extreme case – move to seize assets, McNamee said.

“If you have iconic brands from Italy, Germany, UK and America, you’re ripe for retaliation by the Russian government,” he said.