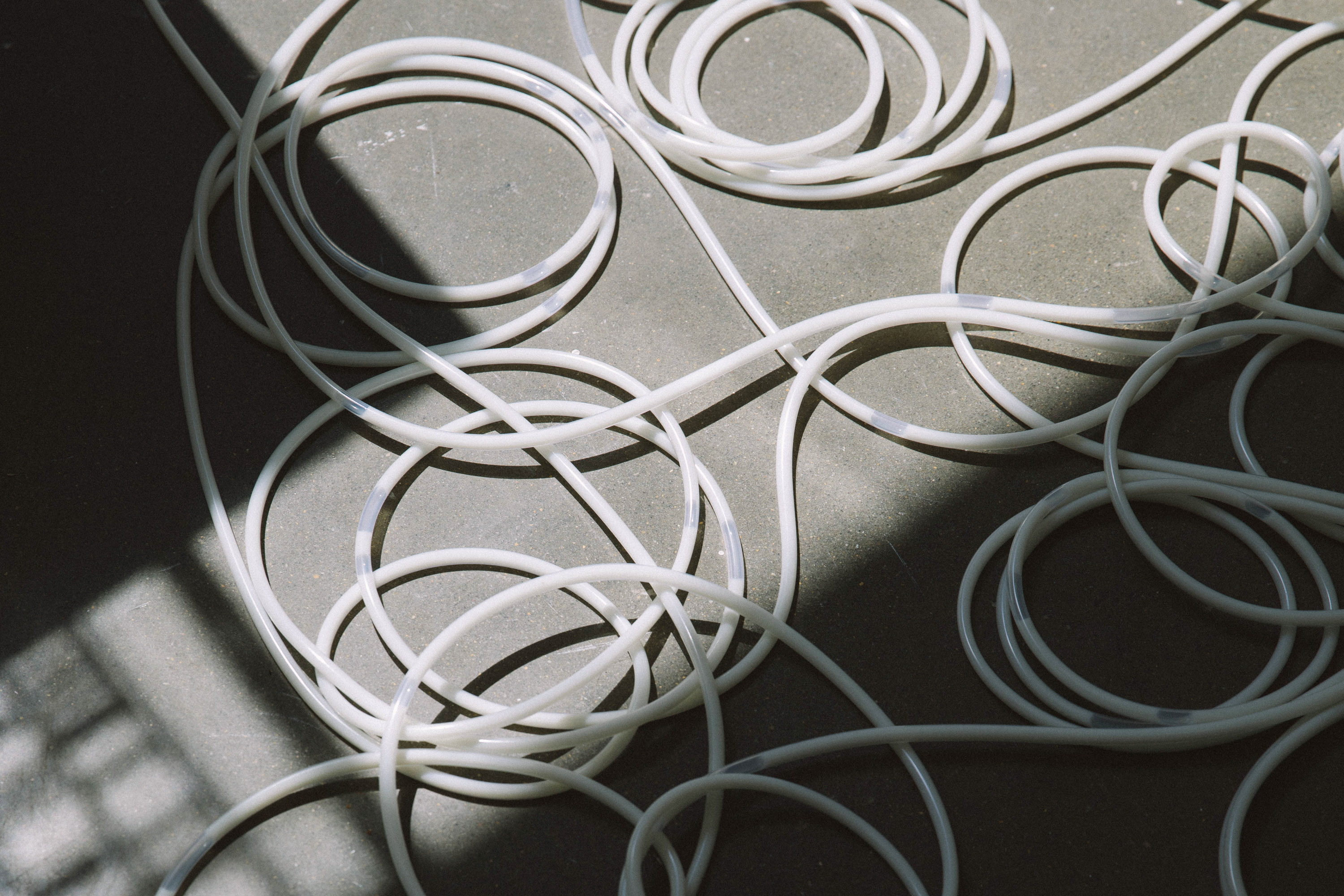 The milk in this exhibit is not real. After much experimentation, Liu ended up filling the pump with “magician’s milk,” a proprietary formula, purchased from a magic shop, that requires no refrigeration and comes with the warning “Not a food product. Do not drink!” Nevertheless, it looks convincing. When installing the piece, Liu originally considered having the milky coils take over the entire gallery floor, even more aggressively immersing visitors in the visual and aural landscape of newborn care.

Liu, who holds graduate degrees from the Harvard Graduate School of Design and the MIT Media Lab, resumed teaching just five days after she gave birth in 2021. She had just signed a new contract as an associate professor of practice at Penn, and the university offers maternity leave only to employees of more than a year. Although she was initially allowed to teach over Zoom from her home in Queens, she ended up pumping more than nursing. “I developed this really intense relationship with my pump, where just hearing the sound of it made me let down, rather than my baby’s cry. It was just such a weird Donna Haraway cyborg moment,” she says, referring to the feminist science and technology scholar who wrote, of the cyborg, that it “does not dream of community on the model of the organic family.”

It was also a moment that led Liu to new research. Her discoveries emerge in the works on display in the Cuchifritos Gallery, which include a series of three-dimensional meditations on technology, motherhood, and childhood in our algorithm-enabled world.

Pumping is also on display as part of the second edition of the exhibition “Designing Motherhood,” now at the MassArt Art Museum in Boston. Michelle Millar Fisher, part of the curatorial team, wrote that the work “cuts right to the heart of the ways in which reproductive labor is hidden, romanticized, socially taboo, and undervalued.”

Liu’s work has additional urgency and resonance after the overturning of Roe v. Wade. Who controls, who supports, and who performs reproductive labor are not just bedroom or broom closet questions (and never should have been); they are playing out on the streets, in state houses, and in the Supreme Court.

Millar Fisher has drawn parallels between Liu’s pumping installation and the work of the artist Hiromi Marissa Ozaki, known as Sputniko!, whose 2010 Menstruation Machine simulates the experience of menstruation; the video part of the piece shows a fictional day in the life of a young man who builds a device to experience life as a person with a uterus.

Liu has long been fascinated by this kind of simulated experience. In 2019, after watching YouTube videos of men sampling simulated labor pains in order to understand their wives’ experience, and finding them wanting on multiple levels, she decided to create her own apparatuses, including a garment called Untitled (woman pains), fitted with a belly and electrodes, that would allow any non-pregnant person to experience the weight and discomforts of pregnancy. Another in the series, Untitled (small inconveniences), simulates incontinence. Made in collaboration with fabricator Randi Shandroski, the garments look like lingerie and simulate one result of sex, but these are not experiences generally considered sexy.

Her pieces demonstrate a mischievous humor, embedded in the everyday indignities of modern life. Consumer culture might seem to celebrate pregnancy, but the products pushed to pregnant people focus on all the things that are “wrong” with the pregnant body: mood swings, stretch marks, incontinence. In response, Liu created Consumerist Pregnancy, which includes a series of creams, masks, and medications, designed in high millennial style (monochrome packaging, sans serif fonts) but honestly labeled “Fatigue,” “Shortness of Breath,” “Swelling.” If you saw them on a pharmacy shelf you would be initially attracted, but once you read the description, even as a person who has been pregnant, it would be hard not to say No, thank you.