Neither war, disease nor inflation are proving capable of preventing American stocks from doing what they’ve almost always done for 13 years: go up. How policy makers devoted to getting inflation under control will view that is becoming a hot topic on Wall Street.

Right now, the 6.6% surge in the S&P 500 ranks – somehow – as the biggest rally to coincide with the start of a Federal Reserve rate-hike cycle since World War II, data compiled by Ned Davis Research and Bloomberg show. Fueled by positive economic reports, equities just notched their second straight week of gains, with the S&P 500 recouping half of its losses since January.

Two distinct views have coalesced around the rally. One, that buoyant markets create headaches for central bankers, representing a failing grade on their efforts to curb inflation and working against that goal by keeping financial conditions loose. Another school holds that as long as things stay peaceful in the markets, Fed Chair Jerome Powell has freer rein to administer the type of medicine needed to get the job done.

“The last thing Chairman Powell has these days is inflation-fighting credibility,” said Michael O’Rourke, chief market strategist at Jonestrading. “Ironically, the more resilient financial markets are, the greater opportunity they provide for the chairman to reestablish that credibility.” 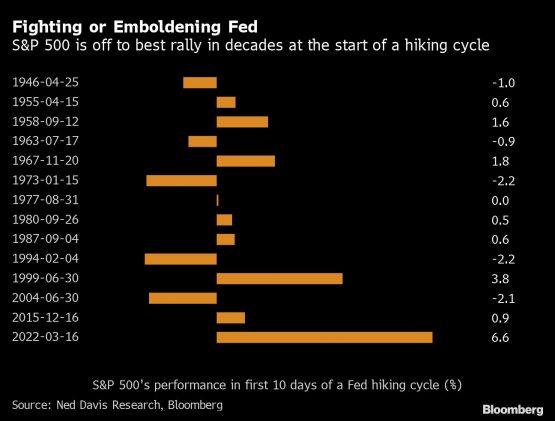 The S&P 500 has gained in all but two sessions since March 16, when the Fed announced its first hike rate since 2018. On Tuesday, when Powell toughened his stance and said the central bank is prepared to raise rates by a half percentage point at its next meeting, the equity gauge jumped more than 1%, rounding out its best six-day rally since 2020.

Along the way, oil prices climbed back above $ 110 a barrel and certain segments of the Treasury yield curve inverted – developments that just weeks ago would have stirred up recession fears and sunk stocks. No such wavering was in evidence this time.

Many explanations exist for the equity resilience. Sentiment may have been washed out with professional money managers furiously unwinding risk and retail money finally retreating. At the same time, profit estimates have increased this year, leading some to speculate that stocks may be working as an inflation hedge. Others see a market that is simply hungry to see the Fed taking seriously its inflation-fighting task, on the grounds that it will yield long-term benefits for the economy.

“In reality, the Fed is just figuring out the least bad policy to rectify the terrible mistake it made by letting inflation run this hot,” said Ipek Ozkardeskaya, a senior analyst at Swissquote. “The good news is that Powell’s got the market wind behind his back – for now.” Thanks to the stock rally, however, the Bloomberg US Financial Conditions Index has eased even after the Fed’s rate hike. That seems to be at odds of what central bankers aim to achieve.

“Bears worry that rising equities undermine Fed efforts to tighten overall financial conditions,” said Huw Roberts, head of analysts at Quant Insight. “Under this scenario, rising equities sow the seeds of their own downfall by provoking a more hawkish Fed.”

Since the rate hike, economically sensitive stocks like producers of commodities and consumer discretionary products have led gains in the market, a sign that equity investors may be endorsing Powell’s view that the Fed will be able to engineer a soft landing in the economy.

Bond investors are less sanguine. Inflation expectations have increased as traders bet price pressures will linger way past 2024, a year when the current tightening cycle is expected to end. Inflation breakeven rates on both five-year and 10-year Treasuries climbed to a record.

All suggesting the Fed would need to slam the brakes harder to cool inflation, potentially tipping the economy into a recession. A flattering yield curve between two-year and 10-year Treasuries is one reason why Chris Senyek warns against chasing the equity rally.

“We’re not buying the bounce, given our views that the geopolitical situation remains extremely fluid, inflation should continue to come in hot, and the growth outlook is weakening,” said the chief investment strategist at Wolfe Research.

Whether further equity weakness could force policy makers to rethink their hawkish stance remains to be seen.

The Fed rarely raises rates when stocks are in distress. The latest hike followed a stretch of declines where the S&P 500 tumbled almost 10% over three months. Only once since 1990 did a hike rate come when stocks suffered deeper losses than now, in December 2018. Back then, the Fed reversed course seven months later.

But the economic backdrop is different now, with inflation running at 7.9%. In 2018, consumer-price gains never exceeded 3%.

“Stronger stocks give the Fed more cover, but I think they’re going to be more responsive to what the price increases is coming through, how’s the labor market performing,” said Kara Murphy, chief investment officer of Kestra Holdings. “Then they’re willing to sacrifice stocks if they need to.”