Stocks sank along with European and US futures Tuesday on concerns that commodity costs will fan inflation and choke economic growth. Nickel briefly soared past a $ 100,000 a ton on a huge short squeeze.

An Asian equity gauge dropped for a third session, European contracts shed some 2% and US futures dropped about 1%. That followed a 3% slide in the S&P 500 on Monday, the gauge’s worst such decline since 2020.

Nickel rose as much as 111% to $ 101,365 a ton on the London Metal Exchange before paring some of the gain. A unit of China Construction Bank Corp. has been given additional time by the exchange to pay hundreds of millions of dollars of margin calls amid the spike.

Oil pushed past $ 122 a barrel on fears of disarray in commodity flows stemming from the war in Ukraine and sanctions on Russia. Everything from natural gas to metals to wheat has hit records for similar reasons.

Treasuries were steady, gold scaled $ 2,000 an ounce and the dollar rose in a sign that the turmoil in commodities is supporting demand for havens. 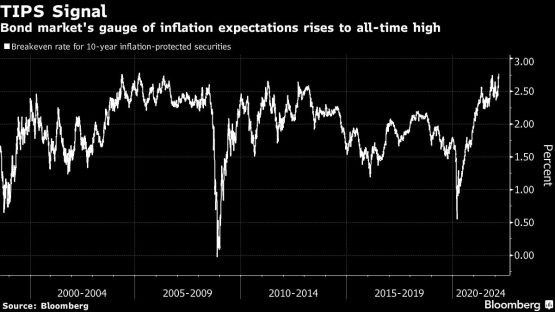 In the US, lawmakers are moving towards barring imports of Russian oil. Russia for its part threatened to cut natural gas supplies to Europe via the Nord Stream 1 pipeline. That underlines how the conflict and economic warfare against resource-rich Russia are dimming the global outlook.

Tightening monetary policy to contain inflation presents further challenges. The gap between two-year and 10-year Treasury yields is around the narrowest since March 2020, a sign of expectations of slowing economic expansion.

“It’s all about slowing growth and rising inflation,” Alifia Doriwala, Rock Creek co-chief investment officer, said on Bloomberg Television. “With the sanctions on Russia intensifying, it’s hitting all sectors. Then you are going to have some central bank action amidst uncertain economic growth. ”

Talks between Ukrainian and Russian officials have made limited progress so far on negotiating a cease-fire but the discussions are expected to continue. Russian President Vladimir Putin said Kyiv must agree to his demands.

JPMorgan Chase & Co. said it will remove Russian bonds from all of its widely-tracked indexes, further isolating the nation’s assets from global investors.

The ruble was indicated as much as 25% higher versus the dollar in offshore trading. That may reflect disagreements between European Union governments on whether to follow the US in seeking a ban on imports of oil from Russia.