Stocks climbed Friday, crude oil rose and US equity futures slipped as the Ukraine conflict and Western sanctions on Russia muddied the outlook for markets and the global economic recovery.

An Asia-Pacific share gauge advanced the most in over a week, aided by the technology sector as well as China, where the central bank boosted liquidity.

US futures fell in a sign of lingering investor caution over the implications of Russia’s invasion of Ukraine. Wall Street rebounded Thursday in a wild session that saw the Nasdaq 100 close up 3.4% after flirting with a bear market.

President Joe Biden imposed stiffer sanctions on Russia, promising to inflict a “severe cost on the Russian economy” that will hamper its ability to do business in foreign currencies. But the US and its allies spared Russia’s oil exports and avoided blocking access to the Swift global payment network. 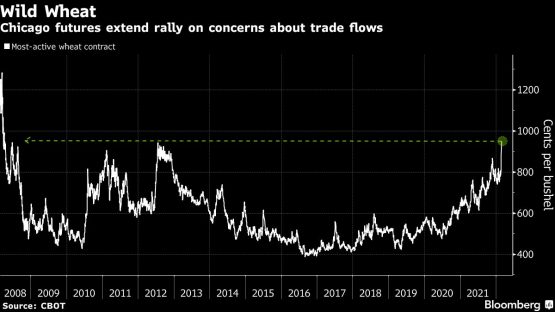 Biden’s announcement leaves markets “looking at some additional sanctions being added, but certainly not as bad as it possibly could have been,” Emily Weis, a macro strategist at State Street Corp., said on Bloomberg Television. That contributed to the Wall Street “risk rally,” she added.

The Ukraine conflict raises the risk of inflation and growth setback for the global economy. Russia and Ukraine are major grain exporters, while Russia is also rich in energy and metals. Supply disruptions could stoke already-high price pressures just as the Federal Reserve prepares to tighten policy.

“How is the Fed going to react to this geopolitical risk?” Frances Stacy, director of strategy at Optimal Capital Advisors, said on Bloomberg Television. “That’s where we’re seeing spikes, where we start to try and reprice speculation around that.”

Fed officials stuck to their resolve to raise interest rates next month despite uncertainty posed by the conflict, with at least one policy maker considering a half-point move. Governor Christopher Waller said such a step could be justified if economic data keep coming in hot.

Markets have pared back slightly expectations for central bank hikes this year, but they still see around six quarter-point increases by the Fed.

Russian assets nosedived Thursday, spurring emergency action from the country’s central bank. Almost $ 200 billion in stock-market value was wiped out, and roughly a third of the sovereign debt’s value.

Here are some events to watch this week: