US and European equity futures rose Tuesday as a drop in oil and upcoming cease-fire talks between Russia and Ukraine helped sentiment. Bets on aggressive US monetary tightening hurt shorter maturity Treasuries.

European contracts were almost 1% higher, while those for the S&P 500 and Nasdaq 100 made more modest gains. Asian stocks climbed after the US rallied for a third day.

Oil slid, taking West Texas Intermediate to about $ 105 a barrel, on concerns that China’s mobility curbs against Covid will sap demand.

The US 10-year Treasury yield edged up toward 2.50%. Inversions along the bond curve, where some short-term rates exceed longer tenor yields, point to concerns about a looming economic downturn as the Federal Reserve hikes interest rates to quell high inflation.

The yen traded around a six-year low against the dollar on the divergence between the Fed and a dovish Japanese central bank. The latter continued with bond-market intervention to cap a surge in yields. 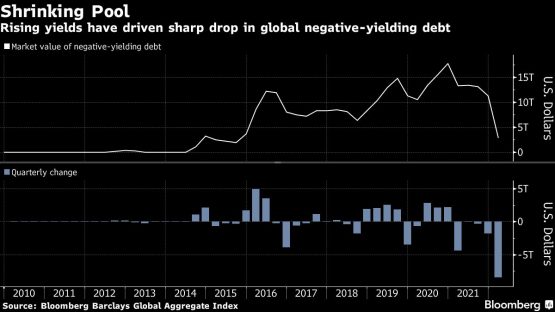 Global shares are up about 8% from the lows reached after Russia invaded Ukraine. Such resilience contrasts with a rout in bonds and inverting yield curves, which are shaking economic confidence. Investors are trying to parse developments in the war, elevated commodity costs and the Fed’s fight against price pressures.

“It makes sense to think about those growth risks, but more form a slowdown perspective and not a recession perspective for this year,” Julia Wang, JPMorgan Private Bank global market strategist, said on Bloomberg Television.

For Asia, Wang said there are two tailwinds in the next couple of months – Fed hike expectations are closer to being priced in, and Chinese policy makers have pledged to support markets and economic growth.

In the latest geopolitical developments, Ukraine is striving for a cease-fire agreement in talks with Russian negotiators starting Tuesday in Turkey and has a “minimum” goal of an improvement in the humanitarian situation.

Elsewhere, Bitcoin traded above $ 47,000 after turning positive for 2022. The token’s rally is among the signs of improved appetite for speculative investments. GameStop Corp. rose for a 10th session Monday, its longest winning streak since April 2010, in the latest revival of meme-stock mania.

Some key events to watch this week: