Soaring oil prices give a lift to resource-rich emerging markets

While the Bloomberg Emerging Markets Hard Currency Aggregate Index has fallen 3% since the war started, 15 of the 81 nations that are gauge’s members are yielding positive returns. Most of them are commodity exporters, with Saudi Arabia, Angola, Uruguay and Qatar leading the way. In the local-currency universe, Nigerian bonds are top performers. “This should be a good environment for Gulf energy exporters,” said Anthony Simond, a money manager at abrdn.

“Fiscal and trade balances are going to look much better with oil above $ 100, and Covid risks are probably limited given relatively high vaccine coverage.” 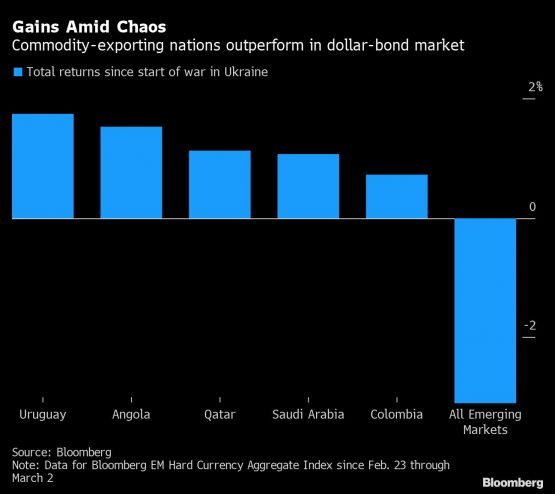 In the equity markets, oil and gas-exporting nations are gaining amid the turbulence, with Abu Dhabi, Nigeria and Qatar benchmarks jumping more than 5% since Russia invaded Ukraine a week ago.

Markets are getting a boost from crude prices above $ 100 a barrel in the wake of President Vladimir Putin’s invasion of Ukraine.

In response to the war, the world’s largest energy exporter has been booted out of major indexes, including MSCI Inc and FTSE Russell. Such moves are set to hand select developing markets a bigger slice of the cash flowing into commodities.

“Major exporters can be boosted. Price increases, especially in agricultural goods, are a manageable hit for emerging markets and can be offset by a stronger trade balance. ”

Commodity stocks are the most resilient group on the MSCI Emerging Markets Index since the start of the invasion, beating other subgroups in both performance and rally momentum, according to a relative rotation study. The sector’s stocks have risen 2%, compared with a 3% drop in the broader gauge. This out-performance could continue, with countries including Brazil, Colombia and Chile driving the gains, Pellandini said.

Saudi Arabian stocks may also get a modest boost from higher oil prices, although higher valuations may temper fund flows, he added.

Row eviction from key bond indexes will spark fund reallocations to Gulf Cooperation Council countries and Africa, as money managers would have to maintain regional concentrations, said Todd Schubert, the head of fixed income research at the Bank of Singapore.

Meanwhile, Lombard Odier and Barclays Plc tout Asia as a big winner, given its distance from the conflict. India and Indonesia will get fund flows diverted from Russia into the corporate dollar-bond market, said Avanti Save, an Asian credit analyst at Barclays.

Bonds of Indian renewable-energy companies would be of greater appeal to investors, she said.

“By moving to Asia, investors will have to give up some spread and yield but arguably it is better than undertaking high default risk in other parts of emerging markets,” said Dhiraj Bajaj, head of Asia credit at Lombard Odier.

“We see India and the Middle East corporations as a key beneficiary, followed by South East Asia.”

While India seems to be a favorite in the bond market, its appeal to equity investors seems to be waning because of its dependence on oil imports.

“We like India in the long term, but we have taken a step back now and reallocated to China,” said Tom Masi, a partner at GW&K Investment Management in New York. “We have to be mindful of its vulnerability to an oil shock and rising input costs.”