Sars is showing its teeth

The South African Revenue Service (Sars) has notched up several successes in catching and prosecuting tax dodgers in the last year or so. These cases involve non-compliant individuals, importers, exporters and, most will gleefully applaud, cigarette producers.

In fact, Sars has been so successful that people are complaining – a complete turnaround of complaints being made a few years ago that the revenue service had been “hollowed out” and reduced to a toothless old dog.

“There is a developing trend where tax practitioners and taxpayers alike cry ‘fear-mongering’ whenever media releases caution against non-compliance, despite numerous statements by Sars of its commitment to a zero-tolerance approach to any form of non-compliance,” says Jashwin Baijoo, legal manager at Tax Consulting SA.

He says recent actions are clear evidence of the new approach by tax authorities under Sars Commissioner Edward Kieswetter.

“The institution is on a mission to rid the country of corruption, one non-compliant taxpayer at a time,” says Baijoo.

“It almost seems as though the revenue authority is warming up to truly deal with delinquency.”

“Following through the prosecution of offenders has shown that actions speak louder than words, with numerous investigations into non-compliance, spanning from high-net worth individuals to the illicit cigarette industry, resulting in convictions and sanctions,” says Baijoo.

During the last year Sars regularly announced raids on warehouses and actions against offenders.

Raid on residences of cigarette supplier

Just last week, three residences belonging to a well-known cigarette supplier in Phoenix, Durban, were raided by Sars officials and police. During the search, a total of 2.31 million sticks of cigarettes valued at approximately R3.1 million were confiscated.

“The cigarettes were being sold at such a low value that it was clear no excise duties were being paid. A full audit will now be conducted on the goods, ”Sars said in a statement following the bust.

Narcotics were also found at two of the houses, including Mandrax and cannabis with a street value of approximately R10,000. The South African Police Service is investigating this.

“The raids form part of an ongoing operation to clamp down on illegal cigarette distributors in KwaZulu-Natal,” says Sars.

“The focus of the operation is to ensure that all cigarettes sold within SA are compliant and that the correct taxes have been paid.

“Sars has taken a firm approach in trying to eradicate the illicit tobacco industry in the country and will continue to conduct customs and tax audits on all non-compliant traders.”

Easier for the compliant, harder on the rest

Kieswetter says Sars is committed to facilitating trade and growing the economy, and “will continue to make it easy and seamless for traders to comply with their legal obligation by providing them with clarity and certainty”.

“Equally, Sars is building its capacity to make it hard and costly for those traders who choose to be non-compliant.

“This is a warning that we will leave no stone unturned in ensuring that those involved in criminal behavior are dealt with harshly,” says Kieswetter.

Sars announced a few weeks ago that the sheriff of the high court had attached assets belonging to a practice of two diagnostic radiologists for outstanding returns and unpaid taxes amounting to a massive R52 million.

Sars named the two directors of the radiology practice, saying that an offer of a compromise was declined.

The tax debt resulted from the submission of various returns to Sars – including company income tax, pay-as-you-earn (PAYE) tax and value-added tax – without payments. For three years.

Sars had the assets of an electrical contractor put on auction after the company failed to pay tax for two years. Assets to the value of R20 million were seized after this company also submitted returns but paid nothing.

“We regard the overwhelming majority of taxpayers as honest and willing to comply,” Kieswetter said at the time. “In doing this, they contribute to raising the revenue needed to help build a capable state that can provide for the well-being of all citizens.”

However, he warned that “wilful and criminal non-compliance from whatever source will not be tolerated”.

“Sars will use every legal instrument at its disposal to make it hard and costly for such taxpayers and traders.”

In January, when announcing that Sars had inspected and searched more places of business and residences of individual taxpayers, once again involving tobacco companies, Kieswetter said the days of systematically and deliberately depriving the fiscus its due through fraudulent and other non-compliant activities are over .

“The intervention and operations are related to wider investigations and audits into the tax affairs of cigarette manufacturers, their directors, related entities and individuals for purposes of verifying their tax compliance and identifying information that may support such audits,” according to Sars.

“These interventions were initiated after potential discrepancies were identified in customs declarations and tax returns related to the entities,” it added.

A physical inspection at the Durban harbor found that 20 goods containers were declared to contain tobacco, but an inspection found a consignment of cement bags.

The same exporter was involved in the exporting of over 10 million kilograms of tobacco – valued at over R450 million.

Sars noted that the platinum group metals (palladium, rhodium and platinum) in the catalytic converters in a car’s exhaust system – to lower harmful emission gases – can also be used for the manufacture of jewelery, car parts and weapons, as well as drugs.

In this case the customs dog detector unit intercepted the three ships weighing 2 649kg destined for Dubai, the UK and Jordan. The catalytic converters and the powder extracted from the core of a catalytic converter were concealed in metal drums and bags. 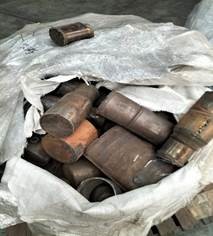 Sars even caught somebody trying to export scrap metal without paying the relevant duties, and more illicit cigarettes.

“Sars used its modern risk and targeting systems to identify the consignments that were being imported by a repeat offender,” according to Sars.

“The consignments were incorrectly declared as ceramic mugs and adhesive tape.”

Where Sars gets its intel…

Sars said late last year that its successes were bolstered by increasing and expanding the use of data mining to enhance its ability to detect tax avoidance.

It says it uses data from various domestic and international sources as inputs for machine learning models, risk profiling and case selection.

International data sources include the automatic exchange of information on South Africans with offshore financial assets from about 100 foreign jurisdictions, as well as several mutual administrative agreements with sister organizations.

“Following the success of collecting over R172 billion revenue from compliance efforts in the prior financial year (2020), Sars has in the current year already collected R115 billion from compliance activities,” it said in January.

“Of this amount, about 33% results from the automatic risk profiling of taxpayers using data and machine learning.”

Tax Consulting SA warns that Sars has expanded its reach with a network of information agreements in place with over 100 jurisdictions across the world.

“It shouldn’t come as a surprise that Sars has taken note when people boast about their wealth on social media platforms,” ​​says Baijoo.

“In order to protect yourself against a run-in with Sars, it remains the best strategy that you always ensure compliance.

“Where you find yourself on the wrong side of Sars, there is a first-mover advantage in seeking the appropriate tax advice and ensuring the necessary steps are taken to protect both yourself and your bank balance from paying the price for what could be the smallest of mistakes.

“However, where things go wrong, Sars must be engaged legally, and we generally find them to be agreeable to the utmost where a correct tax strategy is followed,” says Baijoo.

“As a rule of thumb, any and all correspondence received from Sars should be immediately addressed, preferably by a qualified tax specialist or tax attorney. This will not only serve to safeguard the taxpayer against Sars implementing collection measures, but the taxpayer will also be properly advised on the most appropriate solution to ensure their tax compliance, ”he adds.

For taxpayers wishing to rectify historical non-compliance by means of a voluntary disclosure of past defaults, or ensure their current compliance record remains unblemished, there are various solutions available from a legal standpoint.

The compromise of tax debt is one such solution, says Tax Consulting SA.

“It is aimed at aiding taxpayers in financial distress, both individual and corporate, to reduce their tax liability by means of a Compromise Agreement with Sars.

“Where Sars is approached correctly, a tax debt can be reduced and the balance paid off in terms of compromise, allowing some much-needed breathing room and helping taxpayers to become tax compliant,” Baijoo says.

“Once the compromise [amount] is accepted by Sars and the agreement duly executed, and payment being made as proposed by the taxpayer, the balance of the liability due to Sars is written off by the revenue authority, ”says Baijoo.

He repeats Kieswetter’s sentiments that Sars starts from the premise that most taxpayers are honest and want to fulfill their legal obligations and that these taxpayers will be assisted.

Those who don’t, he says, are taking risks.