South Africa may introduce a gasoline-price cap and ration of the amount of fuel sold to motorists to mitigate the impact of rising oil prices stemming from the war in Ukraine.

The measures being considered place South Africa among a number of other nations weighing steps to offset the impact of surging oil prices on their economies. Brazil has approved a bill to reduce fuel taxes on fuels; Japan will increase subsidy caps on gasoline; South Korea will extend its 20% domestic tax cuts by three months to the end of July; India has kept retail prices for diesel and gasoline at the same levels since November 4, according to BloombergNEF.

“We are part of the global energy supply chain and therefore we are affected by this international conflict,” Department of Mineral Resources and Energy Deputy Director-General Tseliso Maqubela told lawmakers on Tuesday in Cape Town. Possible mitigation measures to counter the impact of rising fuel prices would be strict enforcement of speed limits, encouraging working from home again, limits on diesel quotas exported, and even the possibility of limiting the amount of fuel per motorist should the situation deteriorate even further . ”

South Africa doesn’t produce crude and has been increasing fuel imports as it closes domestic refineries that won’t be able to meet evolving low-carbon standards. The government regulates fuel prices, which include a tax used to finance a fund to compensate those involved in accidents, along with other levies that make up about a third of what consumers pay.

The National Treasury in February kept all taxes on fuel unchanged for the first time since 1990.

The Treasury on Tuesday also said interventions including a price cap previously mentioned by the DMRE should be considered. The government stepped in to shield motorists from a price surge in 2018. The slate levy account, which was used to mitigate the increase at the time, had a negative balance of R5.1 billion ($ 336 million) at the end of January, according to to data from the Central Energy Fund. 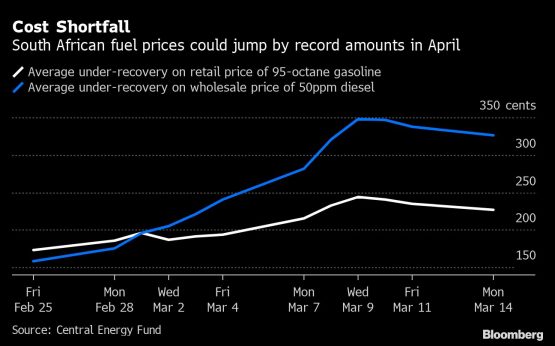 Data from the CEF show the retail price of gasoline could increase by more than R2 per liter next month and the wholesale cost of diesel by more than R3, based on the average under-recovery on these fuels.

That would make transport and input costs for agriculture more expensive, push up food prices and add to consumer inflation.