South Africa’s biggest platinum mining union will next week start submitting wage demands to companies as workers push for a share of the windfall profits brought by rallying metal prices.

Negotiations for a three-year wage deal with producers including Anglo American Platinum Ltd., Sibanye Stillwater Ltd and Impala Platinum Holdings Ltd. are expected to start in the first week of April, said Jimmy Gama, chief negotiator and treasurer at the Association of Mineworkers and Construction Union. He declined to disclose the union’s demands.

“The platinum companies made huge profits in 2021 and they continue doing so,” Gama said in a phone interview.

Johannesburg-based miners announced record dividends after the price of palladium and rhodium – produced alongside platinum in South Africa – rallied. Still, the companies warn that a wage settlement with about 163,000 workers must not threaten the long-term viability of a key export industry.

Union demands must be balanced “through future PGMs commodity price cycles and to avoid wage increases which could place many jobs at risk,” said Nomonde Ndwalaza, a spokeswoman for Amplats, which is controlled by Anglo American Plc. 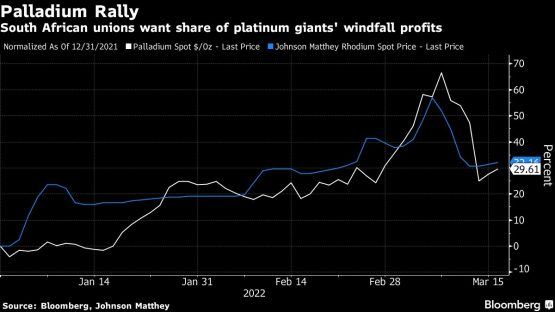 AMCU, which in 2014 led the longest ever platinum mining strike in South Africa, plans to negotiate jointly with rival National Union of Mineworkers, Gama said.

Members of both unions have been on a strike at Sibanye’s gold mines since March 10 after wage talks collapsed. That strike could be extended to platinum mines, AMCU’s Gama said.

“If Sibanye gold continues not to accept the demand of the workers, we will definitely ask all our members in platinum operations to join a secondary strike,” Gama said.