Oil climbs as US crude stockpiles shrink ahead of Fed decision 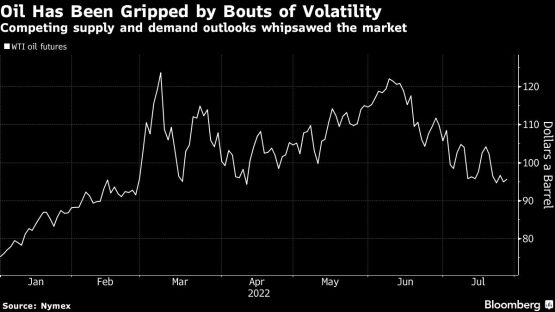 Oil rose as industry data signaled a big drop in US crude inventories ahead of an expected interest-rate hike by the Federal Reserve.

West Texas Intermediate futures edged up near $96 a barrel after closing 1.8% lower in the previous session. The American Petroleum Institute reported crude stockpiles fell by 4.04 million barrels last week, according to people familiar with the figures. If confirmed by the Energy Information Administration later Wednesday, it would be the largest draw since the end of May.

The Fed is expected to approve another large rate increase on Wednesday to combat rampant inflation, escalating concerns that the US may be heading for a recession. Fears over an economic slowdown have rippled through commodities and overshadowed signs of a tight physical crude market.

Prices gained after API data showed a decline in crude, gasoline and diesel inventories, said Stephen Brennock, an analyst at brokerage PVM Oil Associates. “Coupled with the Fed decision on interest rates, today is sure to be a heavy US-centric session.”

Oil is up more than 25% this year, although the market has been whipsawed over recent months amid low liquidity. Majors including Shell Plc and Exxon Mobil Corp. are scheduled to report second quarter earnings this week and are expected to post bumper profits after energy prices surged.

Away from headline prices, one of the most significant oil market moves this week has been the widening gap between WTI and Brent. On Wednesday the US benchmark was trading more than $9 below Brent, after closing with the biggest discount since 2019 Tuesday.

A group of Republican senators including Marco Rubio introduced a bill that would sanction China’s purchases of oil from Russia, but the proposal faces long odds of getting a vote in the Democratic-controlled Senate. It also runs counter to the Biden administration’s policy, which aims to keep Russian crude flowing while at the same time limiting Russia’s energy revenue.