India’s set to become too big to ignore 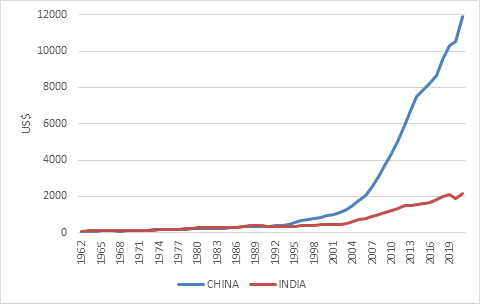 In the past week India marked the 75th anniversary of independence from Britain. Today it is the world’s second largest country by population, only behind China, and home to a staggering 1.38 billion people.

India is set to overtake its northern neighbour within a few years, as China’s population growth has stalled and its demographic profile been distorted by the 1980 to 2016 one-child policy.

India’s economic growth rate has also overtaken China’s, and it is set to be the fastest growing large economy in the medium term, with the exception of oil-rich Saudi Arabia.

Its young population – with a median age of 28, ten years younger than China’s – means it can sustain high rates of growth under the right conditions, benefiting from a so-called demographic dividend.

The big question for investors is therefore if India will match China’s impact on the global stage in the years ahead.

There are several dimensions to this. China started moving away from hard-line communist policies in 1978, gradually creating more space for private enterprises and opening up to the rest of the world. This process accelerated after it joined the World Trade Organisation in 2001.

China became the world’s factory, the largest producer of low-cost manufactured goods from clothing to electronics and much in between. It also became the world’s largest importer of commodities, as it built factories, developed infrastructure and unleashed one of history’s great property booms from the late 1990s onwards.

As they became richer, Chinese consumers have become a key market for global consumer brands, and also a huge source of tourism income for many countries.

China has also emerged as a lender to fund developing countries’ infrastructure upgrades, including the Belt and Road Initiative, while some of its consumer brands such as Huawei are fast gaining ground in global markets.

It is no exaggeration to say that China’s rise completely changed the global economy, creating many winners and losers along the way.

Can India do the same?

Apart from favourable demographics and a large internal market, India benefits from a high rate of savings and investment – around 30% of GDP each (this is not as extreme as China’s, but Chinese rates of investment are unsustainably high). It is enough to sustain high levels of growth, but India also faces constraints.

As in many developing countries, infrastructure remains relatively underdeveloped, educational outcomes are mixed, and government corruption and inefficiencies are a drag.

While private debt levels are low, government borrowing is relatively high, and many industries are shielded from global competition behind tariff barriers. Similarly, there are limits on where and how foreigners can invest. Finally, India heavily relies on coal for electricity generation, a contributor to famously high levels of urban pollution, but also making it the world’s largest coal importer. It is also a major oil importer.

In the decades following independence, India relied heavily on socialist and protectionist policies that resulted in a disappointing rate of economic growth. Following a severe balance of payments crisis (a recurring feature in developing countries) and the government coming close to a debt default, a phase of economic reforms kicked off in 1991 that saw import tariff cuts, deregulation, privatisation and greater integration with the global economy.

This should in theory be possible, since the ideological commitment to statism is less than in China, which is after all still run by the Communist Party. In practice, however, the status quo is usually as it is because someone benefits from it. Overcoming vested interests distributed across a vast country, including 28 states and eight union territories, is difficult and requires the expenditure of large amounts of scarce political capital.

One of the more controversial questions is whether a democratic India can sustain a rapid economic transformation, since other Asian economies that managed to develop rapidly (Taiwan, Korea, Malaysia, Singapore and China) did so under authoritarian rule.

An even more controversial question is whether India will hold on to democratic principles, given the strongman tendencies of its current Prime Minister Narendra Modi.

India is a very different economy today compared with pre-1991; much more dynamic, competitive and innovative.

But even this impressive transformation has lagged China’s.

The two giants had similar income per person in constant US dollars before the 1990s but diverged dramatically as China’s extraordinary growth surge took hold. The IMF estimates that China’s share of the global economy (on a purchasing power parity basis) increased from 5% to almost 20% between 1990 and now. India’s share increased from 3% to 7%.

China will continue to grow in importance for the world economy, but the latest evidence suggests the economy is quite fragile.

Apart from Japan, China is the only large economy where inflation is low and interest rates have trended lower. Core inflation was 0.8% year-on-year in July (it was above 6% in India), while the People’s Bank of China cut its benchmark medium-term loan facility rate by 10 basis points to 2.75% last week. The Reserve Bank of India has been on a hiking cycle. It cut its repo rate to 4% as Covid hit, but has since raised it back to 5.4%

In particular, China’s key housing market still looks very vulnerable and is likely in structural decline. In other countries, the collapse of an overleveraged property market has almost always resulted in a financial crisis (as in the US and elsewhere in 2008). This is avoidable in China given the state’s strong grip on the system, but even then, a crucial growth engine of the last two decades will be largely missing in action.

The problem is that debt and growth can be mutually reinforcing.

When growth rates are high, debt is affordable at virtually any interest rate. In turn, debt fuels more growth. But at a certain tipping point (the Minsky moment) the process goes into reverse. As growth falls, the income needed to service debt is insufficient. It is hard to see China sustaining average growth rates well above 3% in the years ahead. 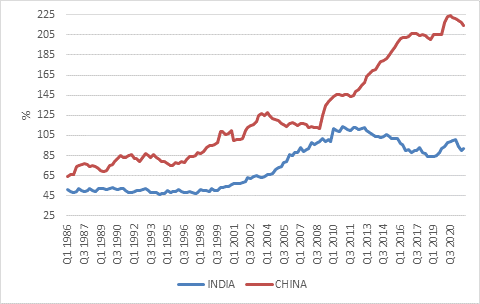 If India can manage 5% growth rates on a sustained basis, which is not too demanding, it is on track to become the world’s number three economy in a decade, overtaking Japan.

But it is unlikely to overtake China and therefore will not have the same impact as the latter did during its spectacular rise.

Indian vs Chinese equities in US$ There are several reasons for this, but it boils down to how much of the increase in economic growth is captured by listed companies.

In a country like China, the government plays a huge role in the economy, reducing the role of Chinese listed companies. Moreover, since global multinationals have taken a large share in several market segments in China, some of the profits show up in the income statements of companies listed in London or New York, not Shanghai or Hong Kong. For instance, local Chinese car brands have increased their market share to around 40%, a major achievement, but it still means most new cars sold are American, Japanese or German.

And then there is also the question of whether listed companies themselves have a focus on sustainable shareholder returns.

In many emerging economies, company management is distracted by vanity projects, political interference, or even outright fraud.

Keeping management honest and focused on profitability usually requires an active and engaged institutional shareholder base, while China’s market has traditionally been dominated by retail investors.

The final point to make is that investors are not blind to changes, and markets are usually pretty good at discounting available information.

India’s stock market trades at a much higher valuation than China’s and the multiples have been moving in opposite directions since the Covid-pandemic.

Investors in Chinese equities have become more pessimistic, and those in India more optimistic.

There are other interesting implications from the above.

As India continues to grow and develop, so will its appetite for imported goods including raw materials. However, it is unlikely to dominate commodity markets as much as China has over the past 20 years as its economy won’t be as large and it doesn’t match China’s record investment ratios (again, this is not necessarily a bad thing as much investment in China has been wasteful).

Despite both being BRICS members, China and India have fought wars over a disputed border in the past and their superficial friendship belies an underlying animosity. The reverse is probably true of India’s relationship with the US.

Thirdly, lumping together all emerging markets into a single asset class is increasingly meaningless. There are real and deep differences between all these countries.

Finally, a broader point about how countries change and evolve for those who believe that South Africa is about to fall off a cliff …

History tells us that change isn’t just a binary good or bad. It is messy, constantly evolving, and things often go wrong before they go right.

China spent most of the 20th Century in a state of absolute chaos: rebellions, famines, civil wars, invasion by foreign forces and ultimately, the repression of Maoism. Out of that turmoil emerged an economic powerhouse, but the economy is now yet again transitioning and maturing.

India’s birth as a republic was also bloody, with millions violently displaced during The Partition, the split of the British colony into India and Pakistan in August 1947. Subsequent years were also pockmarked by periods of sectarian and political violence, economic stagnation and widespread corruption in what must’ve engendered a deep sense of hopelessness.

Part of the lesson is that it usually takes a crisis for politicians to let go of policy shibboleths and unleash the economic creativity of their people – such as Stage 6 load shedding finally forcing the South African government to liberalise the electricity sector.

Despite it all, here we are in 2022, arguing that South African investors should start paying closer attention to India. In the years ahead it will become too big to ignore.

Izak Odendaal is an investment strategist at Old Mutual Wealth.