Stock traders brace for a chaotic reopening to Russia’s market

The Russian stock market is set to partially reopen after being shut down for a month – the longest break since the collapse of the Soviet Union in 1991. The question is what will the price action actually indicate in a severely restricted market that many consider untestable.

When trading resumes at 9:50 am in Moscow on Thursday for a shortened four-hour session, only 33 stocks will be active, including some of the nation’s biggest companies, such as Gazprom PJSC and Sberbank PJSC. However, foreigners will not be allowed to sell equities in a ban scheduled to last until April 1, and short selling will not be allowed.

“Most of the market was made up of international investors, so the inability for foreigners to sell doesn’t translate into a true market,” said Malcolm Dorson, a money manager at Mirae Asset Global Investments LLC in New York. “Given the country has exited most relevant benchmarks, there could be pressure for forced selling from anyone tracking an index. This first step limits the potential volatility that could come from the first day of trading in multiple weeks. ”

Since stocks last traded in Russia on February 25 following its invasion of Ukraine, the country has become a global pariah – the most sanctioned nation in the world, with a crumbling currency and an expected double-digit output contraction. Add in rampant inflation and even a series of aggressive measures by the government to stabilize local markets may not be enough to overcome selling pressure.

President Vladimir Putin on Wednesday attempted to prop up the sinking ruble by demanding local-currency payments for natural gas purchases from “unfriendly” nations.

“This is a typical example of how to further isolate Russia in a way to improve the local market,” said Iskander Lutsko, chief investment strategist at ITI Capital in Moscow. “Until we get a resolution on geopolitics, these kinds of initiatives only make things even worse.” 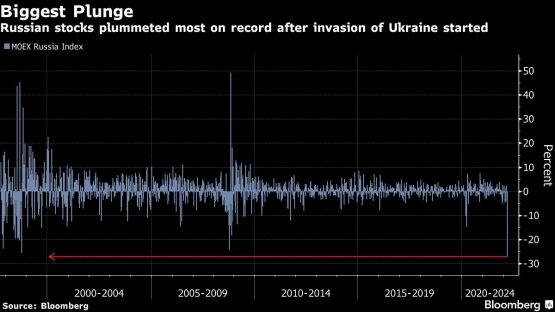 “Many investors accessed Russia via the UK listed GDRs and they have all gone to zero,” he said. “There is likely to be some government support for the shares, and I expect trading to be restricted largely to domestic investors that may not have a global perspective on the situation.”

The Russian stock market’s standard circuit breakers will be in place. Should the MOEX Russia Index move more than 15% over the span of 10 minutes, trading will be halted and replaced by a discretionary auction. Individual stocks will have a 20% threshold. Only equities that have primary listings in Russia will be active, meaning Yandex NV, TCS Group Holding Plc, Ozon Holdings Plc and other companies with main listings abroad will not be traded. Despite Russian regulators’ best efforts, even the limited reopening of the stock market is bound to be chaotic. Global depositary receipts for Russian companies slumped more than 95% before being halted last month. European companies with exposure to the country have lost more than $ 100 billion in market value since war risks surged. And global indexers have removed the nation’s shares from their gauges.

Russia dusted off its equities playbook from the 2008 financial collapse with the government pledging at the start of the month to spend the equivalent of $ 10 billion buying stocks when trading resumed. The total market capitalization of the MOEX Index before it got shut down was $ 357 billion.

With as many as two-thirds of the central bank’s foreign currency assets frozen internationally to punish Russia for the invasion, it’s unclear how the government will be able to access and convert those funds to spur the market.

Beyond the exodus of foreign investors, Putin faces a crisis in his own backyard. Roughly highly regarded central bank Governor Elvira Nabiullina sought to resign after the invasion of Ukraine, but was told to stay by the president. And just this week, longtime economic reformer Anatoly Chubais stepped down as Putin’s climate envoy and left the country, according to people familiar with the situation.