One year on, Metaverse frenzy has yet to yield dividends In the year since Mark Zuckerberg unveiled Facebook Inc.’s multibillion-dollar shift to developing an immersive virtual world, the investment industry has rolled out a flood of products to capitalize on the metaverse frenzy. For investors, the timing could not have been worse.

The four dozen exchange-traded funds and mutual funds in the Bloomberg database that have the word “metaverse” in their description — many of them introduced in the past 12 months — have plunged into the bear market. The Roundhill Ball Metaverse ETF, the biggest of them, has fallen 51% in the past year.

The declines accelerated Thursday after shares of Zuckerberg’s rechristened Meta Platforms Inc. plunged the most in eight months. The chief executive officer and co-founder asked investors to be patient with the huge investments in the metaverse even as the company reported a slowdown in its main source of income, digital advertising.

The performance of the metaverse funds shows the risk of piling in to an unproven industry regardless of the price you pay: The companies that are seen as the building blocks of the metaverse — digital worlds where users can socialize, play and do business — are just the kind of stocks that investors are fleeing right now. Many of them have little or no earnings and sell for high valuations, with the promise of rapid growth and big profits far in the future.

The 18 metaverse funds that have been around for a year or more are down 33% to 66% over the past 12 months. Some of the stocks that are popular with the funds have gotten equally hammered: Meta is down 69%, while games company Roblox Corp. has fallen 42% and graphics-chip maker Nvidia Corp. has tumbled 46%.

And fund industry heavyweights are still rolling out products, along with marketing materials to explain the sector. Allianz Global Investors introduced a fund just last week, while Legal & General Group Plc and Invesco Ltd. also have done so over the past few months.

The metaverse is still as much an idea as an actual product for many companies. But the dramatic change in the market environment means that most investors lack the stomach for long-term bets and are looking for companies with steady growth rates and tangible profits.

For Meta, changing its name and “going all in and investing the amount they are investing in it today” is a big commitment given that the return might not come around for 10 to 15 years, said Kanterman. That’s “an investment cycle that is pretty much two to three times longer than the average cycle for any new product.”

Tech chart of the day 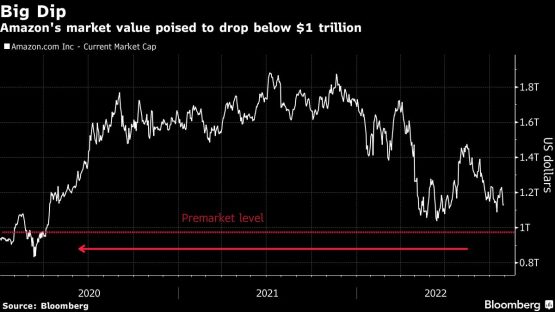 A weak forecast by Amazon.com Inc. triggered a 14% selloff in the e-commerce giant’s stock in premarket trading. Its market value is set to fall below $1 trillion after the company projected the slowest holiday-quarter growth in its history, while sales at its important web services business missed estimates. This will leave only three firms in the elite list of US companies valued at more than $1 trillion: Apple Inc., Microsoft Corp. and Alphabet Inc.