Oil prices soar to $ 139 in response to Russian embargo talks

Oil surged in Asia – briefly touching $ 139 a barrel in a dramatic start to what promises to be another tempestuous week – after the US said it was discussing a ban on Russian crude imports.

Brent jumped as much as 18% in a matter of minutes before paring around half of those gains. The Biden administration is considering whether to ban Russian oil imports into the US without the participation of allies in Europe, at least initially, according to two people familiar with the matter.

That came after Secretary of State Antony Blinken told NBC over the weekend that the White House is in “very active discussions” with its European allies about a ban to tighten the economic squeeze on President Vladimir Putin. The US has so far resisted restrictions on Russian crude imports due to concerns about the impact of rising prices on consumers, but most buyers are refusing to take it, resulting in an embargo in all but name. 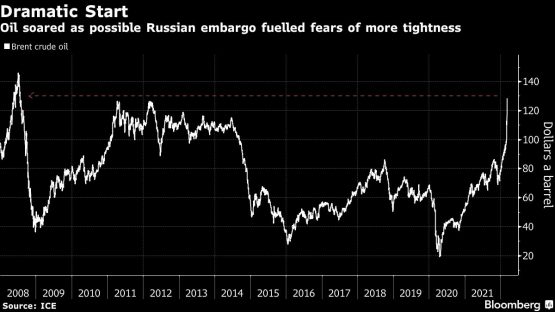 The latest development in the fallout from Russia’s invasion of Ukraine came after oil surged the most in almost two years last week, with the market in disarray and the world bracing for a major inflationary shock. JPMorgan Chase & Co said Brent could end the year at $ 185 a barrel if Russian supply continues to be disrupted, while one hedge fund said $ 200 was a possibility.

“We have plenty of twists and turns to come,” Mike Muller, Vitol Group’s head of Asia, said Sunday on a podcast produced by Dubai-based consultant and publisher Gulf Intelligence. “While I think the world is already pricing in the fact there’ll be an inability to take in a serious amount of Russian oil in the western hemisphere, I don’t think we’ve priced in everything yet.”

Brent traded in its biggest range last week since the launch of the futures contract in 1988 – eclipsing the wild swings in the global financial crisis of 2008 and the demand plunge sparked by the coronavirus pandemic. Traders, shippers, insurers and banks have been increasingly wary of taking on or funding purchases of Russian barrels as they navigate financial sanctions.

There are efforts underway to try and increase supply. Two senior US officials met with members of Venezuelan President Nicolas Maduro’s government in Caracas to discuss global oil supplies and the country’s ties to Russia, according to people familiar with the matter. Iran, meanwhile, made progress toward a deal with world powers over its nuclear program, which could pave the way for sanctions on Tehran’s oil to be lifted by the third quarter.

In more worrying news for supply, however, OPEC producer Libya said its oil output fell below 1 million barrels a day because of a domestic political crisis.

Brent’s backwardation, a market structure where prompt barrels are more expensive than later-dated ones, rose to $ 5.62 a barrel, highlighting the rising anxiety about short-term supply. The prompt spread was $ 3.77 on Friday.

Saudi Arabia hiked prices of its main crude blends for all regions following the surge in oil futures, raising costs for refiners that may be forced to cut processing rates should profit margins shrink. The kingdom boosted its Arab Light crude for next month’s shipments to Asia to $ 4.95 a barrel above the benchmark it uses. That’s the widest in data going back to 2000.

At the weekend, the International Monetary Fund warned that the war, as well as the subsequent sanctions imposed on Russia, will have a “severe impact” on the global economy. “While the situation remains highly fluid and the outlook is subject to extraordinary uncertainty, the economic consequences are already very serious,” the Washington-based lender said.

“With the surge in geopolitical tensions, uncertainty and anxiety, it would be quite difficult to accurately gauge the top of this rally,” said John Driscoll, founder of JTD Energy Services in Singapore. “During the 2008-2009 financial crisis, demand destruction kicked in around $ 150 a barrel,” but this spike is supply-driven and may send prices beyond that level, he said.