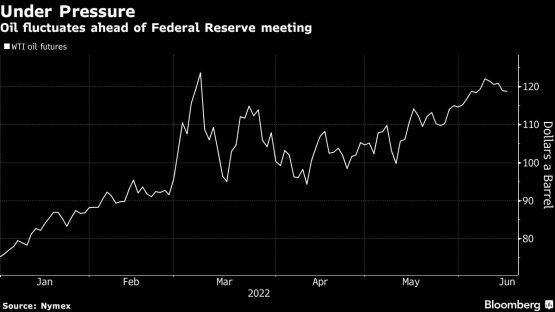 Oil fluctuated ahead of a Federal Reserve meeting that’s expected to see further monetary tightening to combat rising US inflation.

West Texas Intermediate traded near $ 119 a barrel after declining 1.7% on Tuesday – the most in three weeks – amid signs the US may consider taxes on the profits of energy companies to rein in costs and inflation. The Fed is expected to boost interest rates by 75 basis points on Wednesday.

“There’s going to be global economic slowdown worries that follow the hike rate, which the Fed will need to address,” said Will Sungchil Yun, a senior commodities analyst at VI Investment Corp. in Seoul. “The rate increase is somewhat baked into prices.”

US President Joe Biden is planning to visit Saudi Arabia next month, a trip that may mend frayed ties with the kingdom but is unlikely to resolve the energy crisis. Saudi Arabia and fellow OPEC producer United Arab Emirates do not have enough spare capacity to significantly change the market, according to Daniel Yergin, renowned oil historian and vice chairman of S&P Global Inc.

An economic rebound has exacerbated market tightness and helped to send oil almost 60% higher this year. Crude demand remains robust in Asia and China is expected to boost consumption and drive prices even higher once the world’s largest crude importer emerges from strict virus restrictions.

The American Petroleum Institute reported US gasoline inventories dropped by 2.16 million barrels last week, according to people familiar with the figures. Crude stockpiles at the key storage hub at Cushing fell by 1.07 million barrels, while nationwide inventories rose by 736,000 barrels, the API said. Energy Information Administration data is due later Wednesday.