Oil dips before OPEC+ meets amid signs that tightness is easing 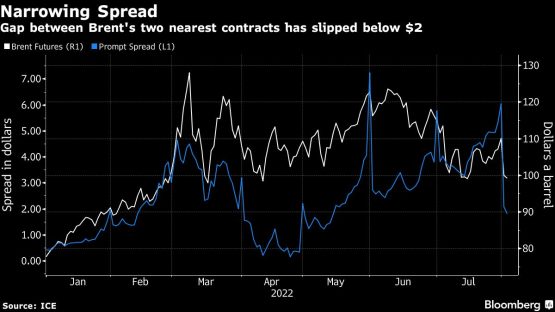 Oil held its decline, after closing at the lowest level in more than five months, as traders counted down to an OPEC+ meeting on supply amid signs that physical markets have eased in recent weeks.

West Texas Intermediate slipped 0.2%, having lost almost 5% on Monday on concerns that a global economic slowdown will erode energy demand. Equity markets and several other commodities fell again Tuesday as worries over a recession — and rising US-China tension over Taiwan — drove investors toward havens.

The Organization of Petroleum Exporting Countries and its allies are due to gather virtually on Wednesday to decide on output policy for September. As the meeting nears, oil’s backwardation, a bullish pattern, has narrowed. Meanwhile, the West African market flashed weakness as Dalia crude was offered at a discount to its benchmark on Monday.

Oil has opened August on a weak footing after declining the previous two months on demand concerns. The drop has wiped out almost all of the gains seen since Moscow’s invasion of Ukraine in late February, even after Washington and the European Union imposed a raft of sanctions on Russian energy exports.

“The price outlook is starting to look a little bit shakier than it was earlier in the year,” Emma Richards, a senior analyst at Fitch Solutions, said in a Bloomberg Television interview. “Demand-side concerns are creeping more and more into the picture” and “we’ll probably see more of that later in the year.”

Brent’s prompt spread — the difference between its nearest two contracts — has narrowed considerably as economic concerns deepened, Libyan production recovered and signs emerged of weaker US gasoline demand. The differential was $1.86 a barrel on Tuesday, down from nearly $4 about a month ago.

The OPEC+ meeting comes after US President Joe Biden urged Saudi Arabia to pump more oil on a visit to the kingdom last month. The alliance has already agreed to return all the supplies it took offline following the outbreak of the pandemic, although some members have been unable to meet quotas in full.

Investors are also digesting earnings from supermajor BP Plc, which raised its dividend and boosted share buybacks after profit rose to the highest since 2008. The company reported strong refining margins and an “exceptional” performance from oil trading.