Gold climbed for a second day as investors weigh the trajectory of the Federal Reserve’s rates tightening cycle against risks to growth from the war in Ukraine.

Bullion extended gains on Thursday after dropping to a two-week low Wednesday following the Fed’s move to raise interest rates by a quarter percentage point. While officials signaled hikes at all six remaining meetings this year to tackle the fastest inflation in four decades, Chair Jerome Powell played down the risk of a recession and declared the economy strong enough to withstand tighter policy.

Higher rates could weigh on non-interest bearing bullion, but demand for the haven asset is being underpinned by concerns over the economic fallout from Russia’s invasion of Ukraine and ongoing concerns that the Fed will struggle to restrain price pressures without a slowdown. A section of the Treasury curve – the gap between five- and 10-year yields – inverted for the first time since March 2020, potentially indicating oncoming growth pains.

Investors continue to seek a store of value amid the uncertainty, with initial data compiled by Bloomberg showing an addition of 11 tons to gold-backed exchange-traded funds Wednesday. 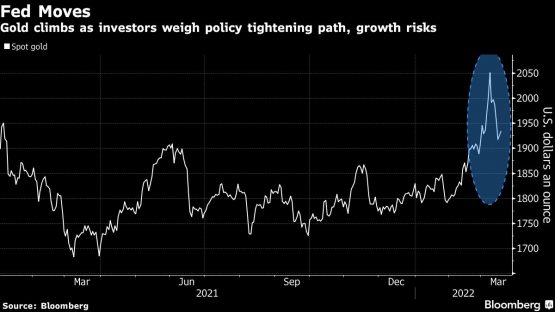 “Gold managed to recover from the initial weakness following the hike, with the 25 basis points hike fully expected by the market,” said Warren Patterson, head of commodities strategy at ING Groep NV in Singapore. “Despite the Fed having started hiking rates, gold prices are still likely to remain well supported on the back of strong safe haven demand. We would expect this support to remain until there is a de-escalation in the ongoing war. ”

Spot gold climbed 0.9% to $ 1 944.63 an ounce as of 10:05 am in London. Prices rose 0.5% Wednesday after dropping as much as 1.2% to the lowest since February 28. The Bloomberg Dollar Spot Index was little changed. Palladium gained 3.1% while silver and platinum also advanced.