Russia’s invasion of shocked commodities markets and propelled prices for the ingredients of modern life to unseen heights, and in the aftermath lies a looming crisis: More people likely will go hungry.

Combat in the fertile Black Sea region, and the ensuing international pullback in doing business with Russia, is strangling trade in wheat, vegetable oils, corn and the fertilizer to grow them, and tighter supplies get more expensive by the day. Global food prices jumped to a record last month, according to the United Nations, just as war started in the world’s breadbasket.

Momentum began with the worsening energy crisis, surging freight and insurance costs, and harvest setbacks amid a pandemic. It’s now reaching supermarket shelves, with products becoming scarce and too expensive for some people. Wheat soared 40% the past week – the most ever – in Chicago trading.

“There’s only so much, especially of a product like wheat,” said Tosin Jack, commodity intelligence manager at Mintec Ltd. “Food security is not just about accessibility but affordability as well.”

These charts show how volatile the situation is now, and how much worse it may get: A UNindex of costs already was near its 2011 peak before the war disrupted exports from the Black Sea region.

“The bullets and bombs in Ukraine could take the global hunger crisis to levels beyond anything we’ve seen before,” said David Beasley, executive director of the World Food Program. Grain markets breached dizzying heights the past week, with wheat skyrocketing to a 14-year high. Russia and Ukraine account for a quarter of global grains trade, and their absence leaves importers clambering to source from other places.

“All these other alternative countries might not even have enough supply for global demand,” Jack said. “Naturally, food prices will go up.” Global grain stockpiles have been sliding in recent years, casting doubt on their ability to cushion the blow from war. There are also concerns that the conflict will prevent farmers in the region from planting this spring.

A longer disruption to imports could make everything more expensive. 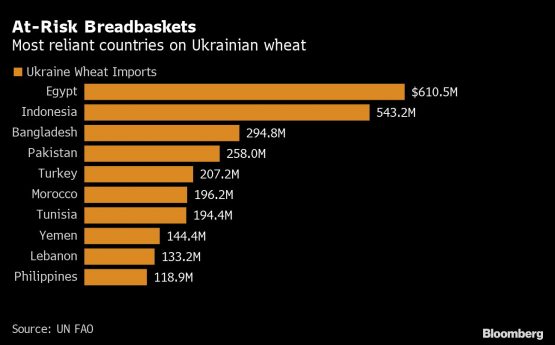 The world’s biggest buyer of wheat is Egypt, where the potential for shortages carries extra resonance because rising food costs contributed to the Arab Spring protests a decade ago. The government may even press ahead on a delicate venture: raising the price of subsidized loaves for the first time in decades.

“This is not just a crisis inside Ukraine,” Beasley said. “This is going to affect supply chains, and particularly the cost of food.”