Central banks in five African nations are likely to raise interest rates in the coming weeks to tame inflation pressures that threaten to become entrenched. Those in the other seven are expected to keep borrowing costs on hold as they assess the impact of supply shocks caused by the war on Ukraine.

The conflict has raised fears that the world economy may be heading for a re-run of 1970s-style stagflation, as soaring prices of commodities from wheat to oil drive up living costs globally. The uncertainty tied to the war, coupled with the potential impact on emerging markets from the US Federal Reserve raising interest rates for the first time since 2018, will be the focal point of African monetary authorities’ interest-rate deliberations.

Rate-setters who foresee a sustained buildup in inflationary pressures will probably be more pre-emptive in raising rates, said Stuart Culverhouse, head of sovereign and fixed-income research at Tellimer Research.

Here’s what central bankers in Africa may do: 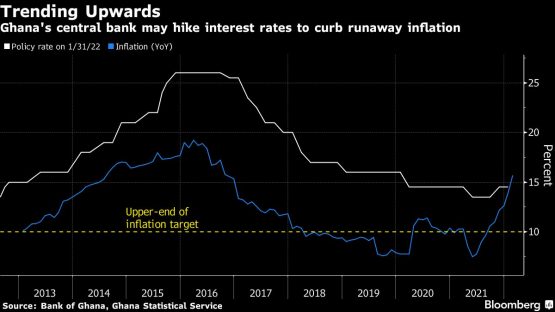 The Bank of Ghana is expected to raise its key interest rate to stem a decline in the cedi, which is trading close to a record low against the dollar, and rein in broad-based inflation that’s near a six-year high.

The central bank is announcing its decision a week ahead of schedule, “an acknowledgment that things have gone a notch beyond expectations and would require a quickened process to arrest the surge in inflation,” said Courage Boti, an economist at Accra’s Databank Group.

He and Patrick Asuming, a senior lecturer at the University of Ghana Business School, expect the bank to raise rates by as many as 200 basis points. That would make the West African nation’s cedi-denominated assets more attractive to investors after the Fed’s decision to start hiking rates this week. 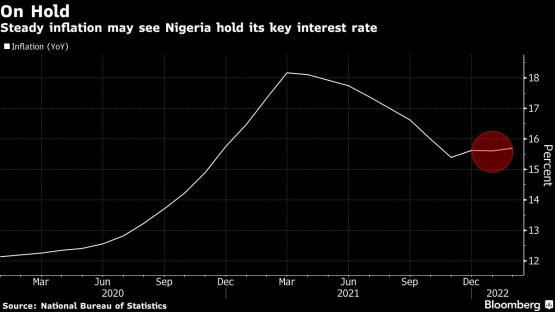 Steady inflation in Africa’s largest economy will likely see the Central Bank of Nigeria leave rates unchanged as it continues to focus on spurring economic growth while monitoring the impact of geopolitical developments on inflation. The economy grew 3.4% last year, after contracting 1.92% in 2020, and Governor Godwin Emefiele has said he will only raise rates once it’s on a sustainable recovery path.

“Economic growth in Nigeria is still at suboptimal levels and the CBN is unlikely to buck their trend of undermining consumer-price pressures to achieve their growth objectives,” said Mosope Arubayi, an economist at IC Group in Lagos. “I see them staying pat on monetary policy tools.”

A survey of four economists conducted by Bloomberg in February forecast the monetary policy committee will begin raising borrowing costs from the second quarter. The central bank has held its key rate at 11.5% since November 2020.

Morocco’s central bank may be tempted to raise rates for the first time since 2008 to protect its currency peg with the dollar and tame inflation that’s expected to ratchet up due to the war in Ukraine. Still, any tightening of monetary policy will do little to contain price pressures that stem mostly from imports and the bank is more likely to hold, according to the research unit of Morocco’s largest pension manager, state-controlled CDG. 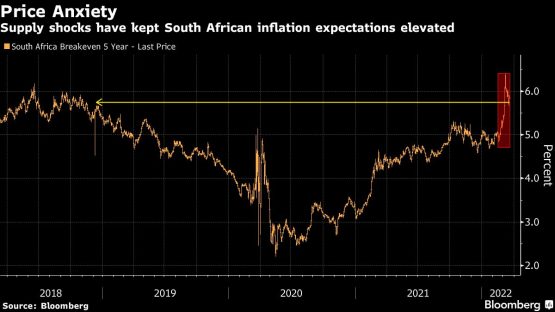 Rising oil and food prices will likely see an upward revision to the South African central bank’s inflation forecasts. It is expected to increase the benchmark rate by 25 basis points for a third straight meeting to avoid higher inflation becoming entrenched. The bank prefers to anchor inflation expectations close to the 4.5% midpoint of its target range.

The National Treasury warned lawmakers on Tuesday that the surge in oil prices due to supply shocks could see inflation edge to the upper end of the central bank’s target range of 6%.

The longer the war in Ukraine continues, the greater the risk that disposable income and growth in Africa’s most industrialized economy will be negatively affected, and that second-round inflationary pressures will arise, said Sanisha Packirisamy, an economist at Momentum Investments.

Forward-rate agreements starting in one month, used to speculate on borrowing costs, are fully pricing in a quarter-point increase, and have put the odds of a bigger move of 50 basis points at 62%. Egypt is likely to hike rates for the first time in more than four years as the war in Ukraine adds to pressure on the North African nation’s external finances.

Egypt had one of the world’s highest differentials between its benchmark interest rate and inflation, helping to attract billions of dollars to its domestic debt market. Surging inflation, which in February reached its highest level since mid-2019, is eroding that advantage.

Goldman Sachs Group Inc. expects the central bank to raise interest rates by 50 basis points and by the same quantum in the second quarter. “Policy rates are the first line of defense against capital outflows and currency instability,” said Farouk Soussa, an economist at the investment bank.

Zimbabwe’s central bank is expected to raise its key rate, already the highest in the world, as “inflation is really beginning to spiral,” said Lloyd Mlotshwa, head of research at Harare-based IH Securities.

The annual inflation rate could reach 105% at the end of the year, driven by rising fuel prices, shortages of food and foreign currency, Old Mutual said in its Economic Environment report this month. A net fuel importer, Zimbabwe hiked its gasoline prices twice in five days and food prices have soared, after the Grain Millers Association of Zimbabwe raised the cost of cornmeal and bread flour by 15%.

With inflation at a 16-month low and within the central bank’s target band, Kenyan policy makers will likely keep the key rate unchanged for a 13th straight meeting. That’s how they assess the impact of a depreciation in the shilling and spillover effects from the war in Ukraine on inflation, said Renaldo D’Souza, head of research at Nairobi-based Sterling Capital. 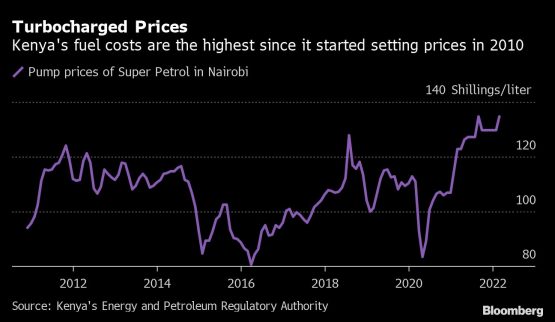 Higher-than-expected price pressures from surging wheat and oil costs may lead the policy committee to revise its inflation forecasts upwards. The net oil importer in its latest monthly fuel-price review raised gasoline costs to the highest level since it started setting prices in December 2010.

With year-on-year inflation slowing for a fourth consecutive month to its lowest level since November 2020, the Victoria-based Central Bank of Seychelles is set to maintain the key interest rate at 2%, prioritizing economic support over containing imported price increases, said Shaktee Ramtohul, a financial analyst and consultant.

Single-digit inflation in Mozambique will likely see policy makers keep rates on hold as they monitor the impact of global developments. Still, if imported inflation builds up, the Bancam de Mocambique might have to take an increasingly hawkish tone later this year, said Fausio Mussa, chief economist at Standard Bank’s Mozambique unit. 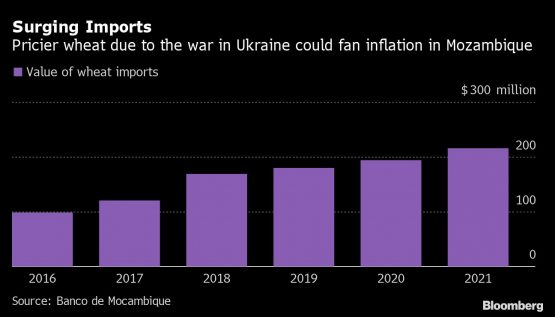 The nation has hiked fuel prices to record high while shielding consumers against an increase in wheat prices. Mozambique imported $ 216 million of wheat last year and all its liquid fuels, making it vulnerable to rising prices.

While Mussa said the government might look to subsidize bread prices as it has in the past, that could complicate ongoing talks with the International Monetary Fund, which generally opposes subsidies, on an economic support program. Angola’s MPC is likely to keep borrowing costs steady as fuel subsidies and a rally in the kwanza, the world’s best performer against the dollar this year, help rein in inflation. Pausing will enable policy makers to assess the impact of global price shocks on items such as agricultural commodities, which are expected to have a major impact on inflation, said Carlo Rosado Carvalho, an economist at the Catholic University of Angola.

The Bank of Namibia is expected to follow in the footsteps of its neighbor South Africa and increase rates by a quarter-point.

Namibia has “a subordinated monetary policy,” meaning it disregards domestic economic factors and instead adjusts rates in the interest of maintaining its currency peg with South Africa, said Namibian economist Mally Likukela.

Uganda’s central bank is expected to hold its benchmark interest rate for a fifth straight meeting as an acceleration in inflation lags behind most other countries.

External risks to price growth are elevated in East Africa’s third-largest economy, although they are unlikely to influence the Bank of Uganda’s decision unless the inflation rate surpasses 7.5%, said Ronald Sebakka Muyanja, head of foreign exchange trading at Stanbic Bank Uganda. the nation’s biggest lender.