Federal Reserve officials, heartened by an inflation slowdown, are poised to slow the pace of their interest-rate hikes for a second straight meeting and debate how much more they need to tighten to get prices under control.

Their campaign — which came too late, some critics argue — seems to be paying off, with a slew of data across the economy indicating that inflation is finally decelerating, a year after Chair Jerome Powell and colleagues incorrectly predicted it would soon fade. Still, a persistently tight labor market with unemployment at a five-decade low means policymakers aren’t ready to declare victory.

The mixed signals complicate discussions about when to pause following an anticipated quarter-point rate increase on February 1, a more moderate pace than the aggressive hike under way since mid-2022.

Investors and economists continue to doubt Fed forecasts that rates will rise to above 5% from their current level just below 4.5%.

“Even with the recent moderation, inflation remains high, and policy will need to be sufficiently restrictive for some time to ensure inflation returns to 2% on a sustained basis,” Fed Vice Chair Lael Brainard said Thursday in Chicago. She did not spell out her preference for interest rates at the next meeting or in the coming months, but other officials have been more explicit.

Both Lorie Logan and Patrick Harker, presidents of the Dallas and Philadelphia Fed banks and voters this year on monetary policy, supported slowing the pace of rate hikes, while supporting further tightening.

“We will raise rates a few more times this year, although, to my mind, the days of us raising them 75 basis points at a time have surely passed,” Harker said in remarks at the University of Delaware on Wednesday. “In my view, hikes of 25 basis points will be appropriate going forward.”

Officials hiked by a half point last month to a target range of 4.25% to 4.5%, slowing the pace of rate increases after four straight 75 basis-point moves. They also projected rates rising to 5.1% in 2023, according to their median forecast, which will be next updated in March.

Investors see rates rising by a quarter point at the next meeting but peaking in a slightly lower range around 4.9%. That view has been reinforced by a recent run of benign readings on inflation suggesting that the Fed is winning the fight on prices, easing financial conditions as markets rally.

“What if financial conditions are easing because the supply side is healing?” said Julia Coronado, president of Macropolicy Perspectives LLC. “I would expect that by the March” forecast round “you would have some Fed officials moving closer to where the market is.” Officials are starting to divide. Some officials see pandemic imbalances improving and want the data to dictate how much more action is needed. Others have a more hawkish outlook because they worry inflation will be sticky and require a sustained period of restrictive policy to insure against a resurgence in prices.

For now, no one is ready to call for a pause in the tightening cycle.

Recent US economic data are mostly in line with the gradual slowing of activity that officials had hoped for. But they insist their job isn’t done, with some saying that outright job losses are needed to get inflation back down to their 2% target.

Several remain committed to pushing rates above 5% as a form of risk management no matter what the near-term data is saying.

“You’d probably have to get over 5% to say with a straight face that we’ve got the right level of the policy rate that will continue to push inflation down during 2023,” St. Louis Fed President James Bullard said Wednesday. “We want to guarantee, to the extent we can, that inflation will come down and get back on a steady path towards the 2% target. And we don’t want to waver in that, because one of the problems in the 1970s is that inflation kept coming back just when you thought you killed it.”

Fed funds futures markets are pricing in just two more hikes this year, and break-even rates in Treasury Inflation Protected Securities have prices settling back to target by the end of the year. Bullard said he was skeptical of such an inflation “crash.”

Most Fed officials appear united around Powell’s framework that it will take a deceleration in the prices of core services other than housing to bring inflation back to 2%. That view is closely linked with reducing wage gains with rising unemployment. Fed officials forecast about a percentage point increase in the unemployment rate in their December outlook. 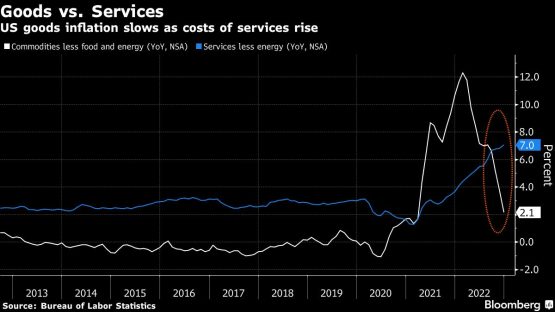 “In order to achieve price stability, I think that is going to require some loosening in the economy and the labor market.” Logan said in a question-and-answer period following her speech Wednesday in Austin, Texas. “And exactly how much, and the exact configuration of that, I think is highly uncertain.”

Brainard is one of the few officials who is offering a different perspective.

“It remains possible that a continued moderation in aggregate demand could facilitate continued easing in the labor market and reduction in inflation without a significant loss of employment,” Brainard said Thursday.

She did not spell out how high she favors raising rates. But she did cite “tentative” indications of decelerating wage gains, anchored inflation expectations, and scope for lower profit margins as forces that could also lower inflation in the months ahead.

Logan, in her Austin remarks, also said she would rather risk management be responsive to data than lock in on a specific goal.

Overall inflation, by the Fed’s preferred measure, ran at 5.5% for the 12 months through November compared with a 6.1% rate the previous month.

“We still don’t have enough evidence that says wage growth is going to evolve in a way that will be consistent with 2% inflation,” said Matthew Luzzetti, chief US economist at Deutsche Bank Securities Inc.