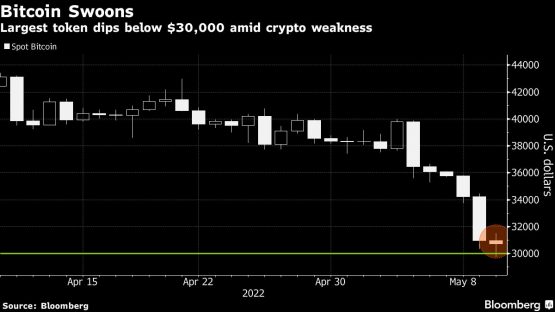 Bitcoin dropped below $ 30,000 on Tuesday for the first time since July 2021, bringing its decline from a November record high to about 55% amid a global flight from riskier investments.

The world’s largest digital token fell as much as 3.9% to $ 29,764 in Asia before paring the slide. It was trading at $ 30 850 as of 11:28 am in Singapore. Ether, the second biggest token, recovered sufficiently to eke out a small gain. Other coins like Solana and Avalanche remained in the red.

“We’re seeing a slow-motion meltdown, partly because it’s mostly been long holders selling” instead of levered liquidations, said Josh Lim, head of derivatives at New York-based brokerage Genesis Global Trading. “Now that some corporate treasuries are hovering near their cost basis, markets are waiting and watching to see if shareholders will force some de-risking.”

Michael Novogratz, the billionaire cryptocurrency investor who leads Galaxy Digital Holdings Ltd., warned that he expects things to get worse before they get better.

“Crypto probably trades correlated to the Nasdaq until we hit a new equilibrium,” Novogratz said on Galaxy’s first-quarter earnings call on Monday. “My instinct is there’s some more damage to be done, and that will trade in a very choppy, volatile and difficult market for at least the next few quarters before people are getting some sense that we’re at an equilibrium.”

The crypto market is also monitoring TerraUSD, an algorithmic stablecoin that aims to maintain a one-to-one peg to the dollar. The peg appeared to fray, with the token’s value falling below 70 US cents Tuesday, according to CoinGecko data.

Do Kwon, the founder of Terraform Labs, which powers the Terra blockchain, is moving to shore up the stablecoin.

Luna Foundation Guard, the association created to support the decentralized token and Terra blockchain, said it will issue loans worth about $ 1.5 billion in Bitcoin and TerraUSD to help strengthen TerraUSD’s peg.

Kwon captured the attention of the crypto world earlier this year by pledging to buy as much as $ 10 billion in Bitcoin to prop up Terra.

“We’re watching carefully to see how the market fares over the next 24 hours,” Steven Goulden, senior research analyst at crypto market maker Cumberland DRW, said in an email. “Including whether mechanisms being introduced to help increase reliance, such as LFG lending out Bitcoin to OTC trading firms, will be enough to hold in times of deep stress or if we need additional stabilization mechanisms.”

Bitcoin’s decline puts it at risk of firmly dropping out of the range where it was trading in 2022, reversing the most recent bull run that drove the token to a record of almost $ 69,000 in November.

With its 40-day correlation with the S&P 500 stock benchmark around a record, according to data compiled by Bloomberg, any further hit to equities sentiment would risk dragging Bitcoin down as well.