Federal Reserve officials will signal a more hawkish stance next week, with interest rates reaching 4% by December and staying high through 2023, economists surveyed by Bloomberg said.

The Federal Open Market Committee will raise rates by 75 basis points for a third consecutive meeting when policy makers announce their decision at 2 pm in Washington Wednesday, the survey found.

That would lift the target range for their policy benchmark to 3% to 3.25%. Fed forecasts released at the meeting are expected to show the upper bound of the range at 4% by year-end and edging higher next year, before cuts in 2024 take it back to 3.6%.

Such a shift represents a big step up from Fed forecasts in June, reflecting a tougher fight against inflation after August core consumer-price growth came in hotter than expected. The survey of 45 economists was conducted Sept. 9-14.

Chair Jerome Powell has said the Fed is strongly committed to getting inflation back to the central bank’s 2% target, and won’t stop its fight prematurely in the face of weaker economic data. The case for more aggressive action has been solidified by Tuesday’s consumer price index report, which showed measures of underlying inflation rising more than expected.

Powell has been vague about how high interest rates might go and in July said the Fed would make policy “meeting by meeting.” That makes the FOMC’s “dot plot” forecasts of the target rate a primary focus for investors when the committee meets Sept. 20-21. Powell will hold a press conference Wednesday, 30 minutes after the policy decision is released.

The rate path which economists expect the FOMC to lay out next week is less aggressive than the one foreseen by markets. Investors fully expect a 75 basis-point increase on Wednesday and see rates advancing a further percentage point by year end to around 4.23%.

The economists’ own forecasts largely match what they expect from the Fed’s Summary of Economic Projections, with rates peaking at 4% in December, then declining in 2024.

Powell is trying to steer the economy towards a “softish” landing of slower economic growth, a still-robust labor market and weaker inflation. That will be reflected in FOMC forecasts for growth of just 0.5% in 2022 and 1.4% in 2023 — both big downgrades from June — with unemployment rising to 4.2% in 2024 from 3.7% reported in August, according to the survey. Inflation remains the central issue driving Fed policy. The FOMC is likely to maintain its forecasts for price pressures and may project inflation of 5.2% for 2022, 2.6% for 2023 and 2.2% for 2024. That would mean missing the Fed’s long-run inflation target of 2% until 2025.

Powell has emphasized that the central bank will be nimble in its rate-hiking plans and the FOMC in its previous statement offered only loose guidance that ongoing increases would be appropriate. Three quarters of the economists expect the committee to repeat the guidance, while most of the rest say the FOMC could say it expects the pace of hikes to slow, echoing Powell’s recent public statements.

Two thirds of economists also expect a unanimous decision this month, with the FOMC keeping a united front behind Powell’s fight against inflation. So far this year, St. Louis Fed President James Bullard has dissented as a hawk and Kansas City Fed President Esther George in a dovish direction.

There’s less certainty around plans to shrink the Fed’s balance sheet. The level at which maturing securities are allowed to expire ramped up this month to an annual pace of about $1.1 trillion. Economists project that will reduce the balance sheet to $8.4 trillion by the end of the year, dropping to $6.6 trillion in December 2024, according to the median estimate. 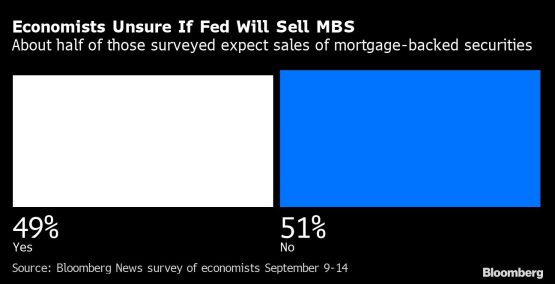 Almost half of those surveyed say officials will resort to outright sales of mortgage-backed securities, in line with their stated preference to only hold Treasuries in the longer run. Among those expecting sales, there’s a wide range of views on when selling would begin, with a slight majority seeing it start by 2023’s second quarter.

Wall Street economists have continued to raise concerns about the potential for recession as the Fed tightens monetary policy amid headwinds including higher food and energy prices amid Russia’s invasion of Ukraine. “Higher-for-longer inflation, more-aggressive Fed monetary policy tightening, and negative spillover effects from a weakening global backdrop will combine to push the US economy into a mild recession in the first half of 2023, in our view,” said Oxford Economics chief US economist Kathy Bostjancic.

Economists were mixed about the outlook, with 49% seeing a recession as likely in the next two years, 33% seeing some time with zero or negative growth likely and the rest looking for the Fed to achieve a soft landing of continuing growth and low inflation .