Explosion in demand for gold as Ukraine smoulders

Demand for physical gold exploded in the last month as war in Ukraine dominated headlines, oil broke $ 100 a barrel and US inflation spiked to a 40-year record of 7.9%.

Gold hit an all-time high last week, breaking above $ 2,070 an ounce, following the US ban on Russian oil and other imports in response to its Ukraine invasion.

Some analysts see gold spiking much higher, with the potential for the mother of all short squeezes on those betting against gold on the Comex futures market.

“We saw a four-fold increase in demand for physical gold this last month,” says Hilton Davies, founder of SA Bullion. 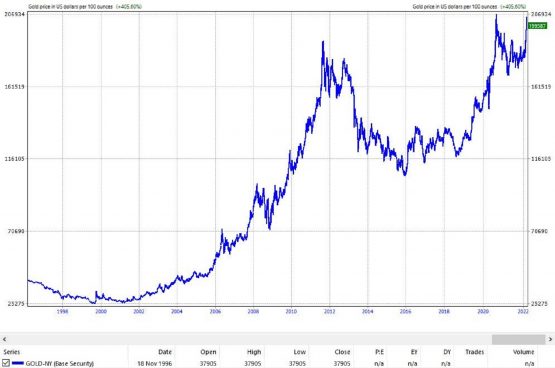 “People are frightened. The war in Ukraine and the run-up in commodity prices will translate into higher consumer inflation which will start to filter through in the coming months, ”he adds.

“Gold has always been a hedge against fear, uncertainty, and, as one would expect, it does well in times of war.”

South Africans are loading up on Krugerrands of different sizes, with demand for bullion bars also on the rise.

Rael Demby, CEO of the SA Gold Coin Exchange, reports a huge swing in Krugerrand interest in recent weeks, with demand from online and in-store purchasers.

“People are calling in, and buying in quantities of five, 10 and even 20 or more coins at a time, which is a sign of fear,” he says.

It’s a similar story for gold and precious metals suppliers elsewhere in the world.

“We’re doing more business in a day or a week than we used to do in a month. We’re looking at [sales] that we haven’t seen in 32 years, ”said Andy Schectman, president of Miles Franklin Precious Metal Investments, speaking on the Quoth the Raven podcast.

The potential for a massive short squeeze in gold has been predicted for years, although it has yet to materialize.

But these are ominous times, with Russia and perhaps China preparing to ditch the global SWIFT mechanism for payments, and possibly launching a Brics (Brazil, Russia, India, China and South Africa economic bloc) digital currency pegged to gold.

Read: SWIFT ban on Russia means the Fed may need to ready dollars

Russia has developed its own domestic alternative to SWIFT, known as the System for the Transfer of Financial Messages (SPFS). It is possible that the SPFS could become integrated with China’s nascent, yet much larger, payment system, the Cross-Border Interbank Payment System (CIPS), reports The Diplomat.

“But in this situation, even if things calm down, you will still have an inflation problem. And it doesn’t look like it will calm down any time soon. You are hoping for peace, but it doesn’t look likely based on what we’ve seen lately. We are going to get these supply shocks counting across the board, ”TD Securities head of global strategy Bart Melek told Kitco.

Schectman argues that the latest rally in gold is just a foretaste of things to come, with potential for a mining stock super-rally.

“All mining stocks in the world are worth less than the Coca-Cola market cap. The number one performing stock in the great depression was Homestake Mining, ”he says.

“When you see gold over $ 2,500 [an ounce] and silver over $ 30 / oz and rising, when you see inflation continuing to erode the value of the dollar, if just 1% of people realize that 50% of all the money in this country was created in the last two years, mining shares could explode in value while everything else is imploding.

”Mining shares and physical gold and silver are cousins, with no counter-party risk. Mining shares belong to the top 10% of your portfolio. Expect a flood of money from hedge funds and institutional investors. ”

Sam Hewitt, author of The Behavior of Gold Under Inflation, notes that throughout history gold has always been preferred to paper money during times of crisis.

With war looming after the Great Depression, the US government banned private ownership of gold, forcing citizens to hand over their gold at $ 35 an ounce.

Schectman says we could see a short squeeze in Comex gold and silver futures similar to nickel, which more than doubled in price to top $ 100,000 a tonne on the London Metal Exchange last week.

Nickel is used in stainless steel production and electric vehicle batteries, and Russia is the world’s third largest supplier.

Vladimir Potanin, president of Norilsk Nickel, the world’s largest producer of palladium and high grade nickel, warned Russian President Vladimir Putin against nationalizing the assets of foreign companies that have opted to quit the country over its invasion of Ukraine.

“Firstly, it would take us back 100 years, to 1917, and the consequences of such a step – global distrust of Russia on the part of investors, [which] we would experience for many decades, ”Potanin said on the Telegram.

Everything is in place to break the petro-dollar, which gives the US dollar its global reserve status. Russia may start demanding payment for oil and gas in rubles. Russia signed a joined military pact with Saudi Arabia and Nigeria, an ominous sign of the realization in global geopolitics.

Russia and China have been planning for this event for years, and were not taken by surprise by the Western allies’ imposition of sanctions, adds Schectman. “They knew what we were going to do. We may see [that] governments could usher in modern monetary theory [unlimited printing of money]and bail-ins for the banks [essentially, stealing the deposits of clients]. This could happen in the blink of an eye. ”

Both Russia and China have been loading up on gold for the last decade. Chinese figures are secured by unreported stats for state-owned agencies such as the army, but by some estimates the country owns 15,000 tons, nearly double that of the US. Russia’s gold holdings are reckoned to be about 2,300 tons, making it the fifth largest in the world.