European natural gas erased earlier losses amid an outlook for colder weather across much of the continent.

Benchmark futures are trading in a range near 100 euros per megawatt-hour, after an initial burst of volatility following Russia’s invasion of Ukraine last month on top of low European inventories.

While those storage sites are showing the first signs of replenishment, the forecast for lower temperatures during the next two weeks may delay the refill of facilities for next winter. 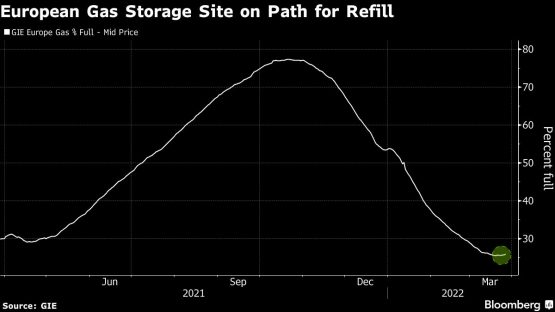 Flows from Russia, which account for about 40% of Europe’s gas demand, have been largely unscathed amid the war in Ukraine. Supplies to the continent via key pipeline routes remain steady at a high level, grid data showed on Monday. Russian exporter Gazprom PJSC says gas is flowing normally via Ukraine.

Uncertainty remains over Russian President Vladimir Putin’s request to demand rubles for the gas his nation sends by pipelines to Europe. Group of Seven energy ministers unanimously rejected the demand as “one-sided and clear breach of contracts,” according to German Economy Minister Robert Habeck.

Yet Russia won’t ship its gas for free, and if Europe refuses to pay for Russian gas deliveries to Europe, Russia will consider what to do next, Kremlin spokesman Dmitry Peskov told reporters.

Europe is racing to reduce its reliance on Russian energy. The European Union and the US, this year’s biggest producer of liquefied natural gas, last week agreed on a deal to increase shipments. The bloc’s leaders also backed the idea of ​​member states jointly buying gas to replenish depleted reserves and obtain lower prices in a tight market.

“We expect to continue to see news and comments from heads of state in Europe on changes to Europe’s energy mix, but we acknowledge that substituting Russian energy is likely to be a challenge in the near term,” Moscow-based Sova Capital Ltd. said in an emailed note.

France is looking to build a new floating LNG import terminal in Le Havre, Les Echos reported Monday. Croatia plans to expand its existing facility, while others from Germany to Estonia are pushing for more plants to access LNG and sever links to Russian gas.

Italy’s Eni SpA, a major buyer of Russian gas, said it could replace all of that supply in a few years, according to Chief Executive Officer Claudio Descalzi. Half of the Russian shipments can be replaced by next winter, and up to 80% of the following winter, he said during a panel discussion in Dubai. Italy also counts on supplies from its own fields.

“A pivot away from Russian gas is effectively a pivot toward LNG, at least across the 2020s,” Timera Energy said in a note on the website. “This is sparking a renewed focus on LNG import infrastructure and supply contracts.”

Norway, Europe’s second-largest gas provider, has also been taking measures to boost fuel output. Aker BP ASA and its partners in the Skarv license decided to stop injecting gas for oil production and will export the increased available volumes instead.