Euro-zone inflation quickened to an all-time high, outstripping expectations as Russia’s invasion of Ukraine threatens to send energy costs soaring at an even faster pace.

Consumer prices jumped 5.8% from a year ago in February, up from 5.1% the previous month and more than the 5.6% median economist estimate in a Bloomberg survey. A core measure that excludes volatile components also accelerated, reaching 2.7%.

The numbers hit just as the Bundesbank warned that German inflation may average 5% this year. Still, it said that there are not yet signs that longer-term expectations are becoming de-anchored.

Markets aren’t convinced. The rate on 10-year German inflation-protected debt fell as much as nine basis points to -2.51%, set for a record low on a closing basis. Meanwhile, German 10-year yields held gains, rising four basis points to minus 0.040% and the euro continued to trade near the lowest since May 2020. 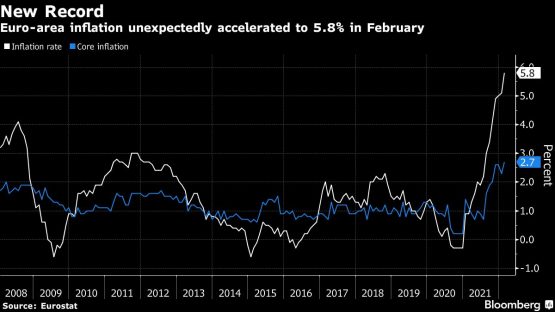 Energy remained the main inflation driver, with an analysis from Deutsche Bank warning that rising oil and natural gas prices are pushing the euro lower and causing “a vicious inflationary spiral.” Crude priced in the common currency hit an all-time high on Tuesday.

The data come a week before European Central Bank officials meet to set monetary policy – a task that’s being complicated by the outbreak of the war just across the euro region’s border.

“There is still considerable inflationary pressure,” said Commerzbank AG senior economist Christoph Weil, who expects energy prices to continue to rise in the coming months. “This means that the next inflation shock is already looming in March. We assume that the inflation rate will then cross the 6% threshold. ”

With Europe in recovery mode as the pandemic fades, policy makers maintain that scaling back asset purchases is still their goal. But they’re signaling that a decision to wind down bond-buying will probably be postponed as the focus shifts to containing the knock-on effects from the fighting.

Much will depend on how Russia’s assault affects the euro-area economy, which remains blighted by supply shortages, lingering virus curbs and energy spike. New projections due next week will offer some insight into where growth and inflation are headed. The crisis will reduce output by between 0.3 to 0.4 percentage points this year, according to projections presented by ECB Chief Economist Philip Lane last week.

Lane’s Executive Board colleague Isabel Schnabel has said inflation may accelerate further in the near term and won’t slow “nearly as fast as we previously anticipated.” She also suggested price growth won’t slow below the ECB’s 2% goal in the medium term – one of the conditions needed for policy makers to consider raising interest rates.

Unless Ukraine and Russia strike a peace deal in the coming days, economists at Nordea don’t expect a hike this year. Money markets this week pushed wagers on the ECB raising borrowing costs back into 2023.

Officials should take time to thoroughly assess the implications of the war before continuing with their stimulus exit, according to Governing Council member Olli Rehn, who told Bloomberg on Tuesday that “the direction of normalization is still, in my view, appropriate.”