The dollar has powered ahead of every major currency over the past nine months due to the prospect of Federal Reserve interest-rate hikes but the end of its rally may be in sight, if history is any guide.

The US currency has weakened by an average of 4.1% during the Federal Open Market Committee’s four previous tightening cycles, based on data from the US central bank and the Bank for International Settlements going back to 1994.

“History shows the dollar decreases more often than it increases when the FOMC is tightening, particularly in the early stages,” strategists including Joseph Capurso and Carol Kong at the Commonwealth Bank of Australia in Sydney wrote this week in a note to clients.

Commodity and Asian currencies generally strengthen against the dollar when the Fed is raising rates as investors take the hikes as a sign of improving global growth and demand for resources, they wrote. The Bloomberg Dollar Spot Index has surged more than 7% over the past nine months, about the time when its current uptrend got underway. Over the same period, the US currency has strengthened against all of its 16 major counterparts.

The rally was driven by improving US economic growth and quickening inflation that led traders to build up bets on a new round of Fed rate hikes. The central bank will deliver the first of those at its two-day meeting ending Wednesday, according to all of the 88 economists surveyed by Bloomberg. A total of seven hikes are now priced in for this year, Bloomberg data show.

Not everyone is convince the dollar’s rally is approaching its end.

If the Fed proves even more hawkish than expected this week, investors may see that as another reason to get on board the dollar bandwagon.

“Should the US lead the world in taking action against sustained levels of inflation, we could see currency traders jump onto the theme of ‘interest-rate differentials,'” said Brian Gould, head of trading at Capital.com in Melbourne. “The lure of owning higher-yielding currencies, whose countries have higher central bank interest rates, may dominate medium-term themes and drive the US dollar higher.”

Dollar has largely followed rate differentials between US and other economies 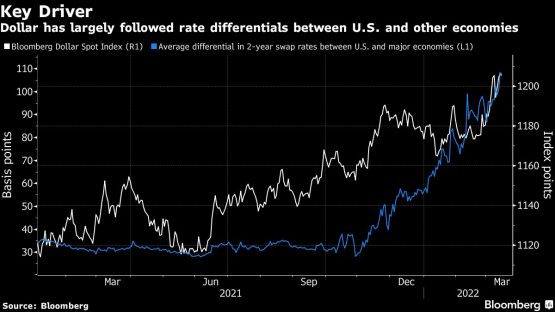 Still, signs are emerging that the rally in the greenback is starting to look overstretched.

Hedge funds have trimmed net-long dollar positions versus a basket of eight other major currencies in each of the past four weeks, according to data from the Commodity Futures Trading Commission compiled by Bloomberg. At the same time, a lot of the dollar-positive news is already factored in.

The outlook for the dollar is far from being wholly positive, it is just “the least dirty shirt in the laundry basket,” said Rodrigo Catril, strategist at the National Australia Bank in Sydney. Even if the Fed shifts up its 2022 median dot plot from three hikes this year toward four or even five, that is unlikely to result in a long-lasting boost to the greenback, he said.