Bitcoin’s underwhelming performance so far this year has silenced those predicting a gilded pathway to the moon.

Make no mistake, one can never rubbish those who forecast a price of $ 100,000+ for 2022, because if there’s one thing we know about bitcoin (BTC) is that it’s always capable of surprising – both to the upside and the down.

Jason Appel at Seeking Alpha is one of those forecasting a BTC price north of $ 100,000, though he believes a more protracted bear market is still a possibility, “but the technical structure indicates a price being much closer to a significant bottom than a lasting top” .

“There’s been no compelling evidence in the action since either the April or November 2021 highs to indicate Bitcoin is in something worse than a bull market consolidation.”

A look at the weekly chart for BTC tends to confirm Appel’s assertion about a consolidation and a possible market bottom forming.

There was a failed breakout above $ 64,000 in November last year followed by a sharp pullback. The chart below shows BTC v Nasdaq, with the last three months demonstrating a fairly close correlation. The Nasdaq is down 21% since peaking in November last year, while BTC is down 39% over the same period.

What’s interesting is that the Nasdaq is down 6.3% over the last week, while BTC is up 4%.

Revix investment analyst Brett Hope Robertson notes a potential decoupling of cryptos from risk stocks, as we are now in almost unprecedented territory where cryptos are displaying less risk than the tech-heavy Nasdaq. 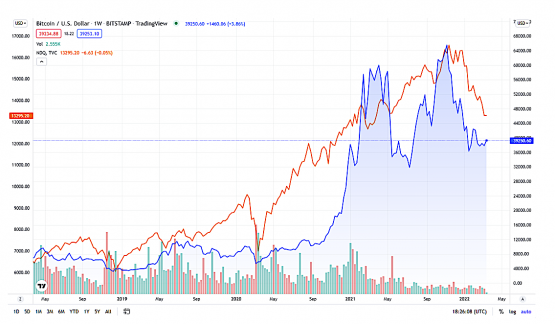 What makes the $ 30,000 area even more important from a technical perspective is this level is roughly equal to the 61.8% Fibonacci retracement of the entire bull run off the March 2020 lows, Yates says.

“Though painful, such a move would be consistent with previous bear markets and would again represent an excellent long-term buying opportunity.”

Capitulation events like this often signify a complete and total flush out of all remaining sellers, turning the tides in the favor of the bulls, according to Glassnode.

Some 82% of supply held by short-term holders is held at a loss, while supply supplied by long-term holders is at an all-time high. Despite the weaker short-term demand, “hodling” remains the preferred strategy, “with the proportion of younger coins now at all-time-lows. This is historically associated with late-stage bear markets, ”says Glassnode.

For all the bearishness bleeding into the markets, don’t count out the prospects of seeing BTC north of $ 100,000 in 2022.