Investors in Chinese developers are bracing for one of the worst earnings seasons in more than a decade – and even then, they’re unlikely to get the full picture right away.

At least nine property firms including defaulters China Evergrande Group and Kaisa Group Holdings Ltd. expect to miss this month’s deadline for reporting audited annual results – the first round of earnings since a credit crunch sent shockwaves through the industry and triggered a wave of defaults.

The delays, combined in some cases with auditors resigning, extend the uncertainty around how much embattled developers owe, and whether they are making any progress in replenishing cash to repay creditors and remain in business following a crackdown on excessive leverage. Six months ago, most private builders reported that their debt profiles improved, only for the liquidity crisis to send many into distress.

“Lack of transparency for developers, especially with regard to their off-balance-sheet debt, could complicate the process for accounting,” said Bloomberg Intelligence analyst Kristy Hung. “Developers who miss the March 31 deadline are those with bigger debt problems which could require stricter scrutiny from the auditors.”

Such scrutiny could reveal a worsening of government-imposed debt metrics known as the “three red lines,” Hung said. Cash to cover short-term borrowings may drop as local authorities protect home presale proceeds held in escrow accounts, she said. Hidden borrowings may surface, driving up the ratio of net debt to equity. And liabilities may remain above the threshold of 70% of assets, Hung wrote in a note. 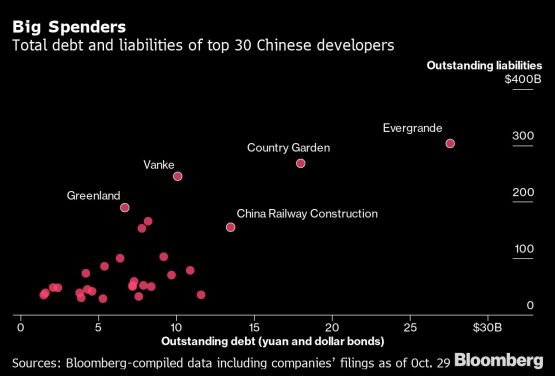 Those that report even on an unaudited basis are likely to show how a prolonged plunge in home sales is denting the bottom line. Profit probably declined substantially after slower construction delayed home delivery and income booking, said Raymond Cheng, head of China and Hong Kong research at CGS-CIMB Securities.

It will be “one of the worst result seasons for the sector since 2008,” Cheng said.

Citigroup Inc. analysts forecast an average 20% drop in core profit among the 29 major builders they track. A sharp home-price correction may force developers to mark down the value of their residential inventory, China Index Holdings analyst Liu Shui said.

Firms listed in Hong Kong that release preliminary results by March 31 due to Covid-related issues have an additional month to file audited numbers and avoid a trading suspension. Here are some major developers to watch.

The world’s most indebted developer is among those set to miss the reporting deadline, and hasn’t indicated when it might publish results. It’s likely to see core profit plunge 98%, according to the average estimate of four analysts surveyed by Bloomberg, after unprecedented construction halts dried up revenue booking.

Investors will be hoping for more clarity over its cash and liabilities, after the company said this week that 13.4 billion yuan ($ 2.1 billion) of deposits at its property services unit were seized by banks after being used as security for pledged guarantees by an unidentified third party.

Evergrande’s liabilities exceeded $ 300 billion in June, and it’s now heading for a massive debt restructuring after being declared in default in December. The company told investors this week that it’s on course to provide creditors with a preliminary proposal by the end of July.

Core profit at Shimao Group Holdings Ltd. may slip 2% from a year earlier, while net debt could fall about 6%, according to analyst estimates. It plans to publish unaudited results on March 31 and the audited version a month later.

Investors are keeping a close eye on the luxury developer’s debt payments after it became a “fallen angel” – downgraded to junk – amid mounting concerns over its financial health. Shimao faces $ 2.5 billion in bond obligations coming due this year, along with delayed repayments on trust products.

The country’s third-largest developer by sales, Sunac China Holdings Ltd. warned this week that core profits probably fell 50% last year, due to factors including a decrease in sales, provisions for impairments and allowances for credit losses on receivables. That’s steeper than the 14% decline anticipated by analysts. Like Shimao, it plans to publish unaudited results on March 31.

The upmarket builder is facing resurfacing liquidity doubts after global ratings companies downgraded the firm, a contrast from January when it raised $ 580 million in a share sale and pledged it had enough cash to deal with short-term debt.

Country Garden Holdings Co.’s financials will be a window into just how corrosive the property crisis has been for even the strongest names, with policy easing so far doing little to restore homebuyer confidence. The nation’s biggest developer by sales may see core profit rise 4% and net debt climb 2%, according to analyst estimates. Dollar bonds of the Guangdong-based developer have recently joined the sell-off afflicting distressed rivals, even as analysts regard its maturity profile this year as manageable. Country Garden is scheduled to report on March 30.

Once viewed as relatively immune to the clampdown on the real estate sector, Logan Group Co. has shaken investor confidence this year on reports of undisclosed debts. Creditors may scrutinize the possible scale of its more opaque obligations in the earnings, which are scheduled for release on March 31. Both its net debt and core profits probably stayed little changed, according to analyst estimates compiled by Bloomberg.