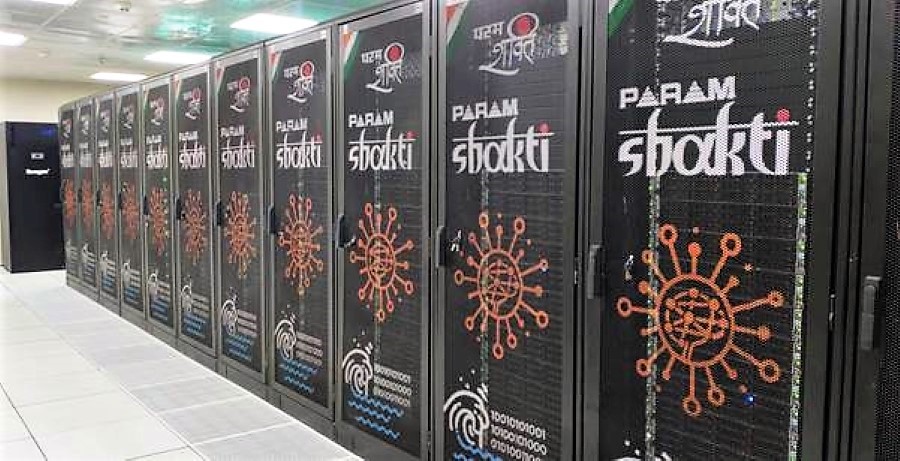 “PARAM Shakti“, a Petascale Supercomputer” at IIT Kharagpur, has been dedicated to the nation under Indian government’s National Supercomputing Mission (NSM) – a joint initiative of the Ministry of Electronics and Information Technology (MeitY) and the Department of Science and Technology (DST). Under NSM, India aims to expand and develop the supercomputing capacity by manufacturing its own supercomputers in the country.

The PARAM Shakti facility is an outcome of MoU signed between IIT Kharagpur and CDAC in March 2019, according to which this state-of-the-art Supercomputing Facility with 17680 CPU cores along with 44 GPUs has been established now.

PARAM Shakti supercomputing facility would accelerate research and development activities in multidisciplinary domains of computational and data sciences as it provides large-scale computing power to the user community of IIT Kharagpur and neighboring academic and R&D institutes.

This facility has pioneered in using RDHX based efficient cooling system to obtain a high power usage effectiveness. This system has been tested extensively by both IIT Kharagpur and CDAC for commercial, open-source and in-house software pertaining to diversified applications.

Earlier in 2020, the government has announced a 100 Artificial Intelligence (AI) PetaFlops supercomputing system, PARAM Siddhi – AI, created and installed in the C-DAC facility by NVIDIA.

In October 2020, it was reported that India’s total network of Superconputing performance is still to reach 16 Petaflops (PF), is less than of Piz Dainta Switzerland -based supercomputer, which has performance power of 27.1 Petaflops (PF) [theoretical peak performance] and ranked 21st in TOP500 ranking of supercomputers until last November.

IIT Kharagpur has also established the Center for Computational and Data Science with a mandate to train the researchers in Supercomputer accelerated R&D. The new high-performance computational facility would help researchers to solve large-scale problems of different fields of Science and Engineering.

Furthermore, NSM has sponsored a number of application research projects using this Supercomputing facility involving researchers for IIT Kharagpur and other Indian institutes and industries.