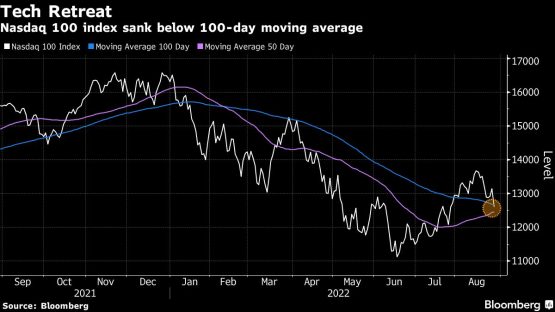 Bonds in Europe led a global selloff that lifted the two-year Treasury yield to levels last seen in 2007 as European Central Bank policy makers joined their Federal Reserve counterparts in signaling aggressive tightening. Stocks sank with US futures and the dollar climbed.

A global share index fell to a one-month low and European stocks extended last week’s drop, with the rates-sensitive technology sector leading a broad-based decline. US futures retreated, with contracts on the Nasdaq 100 underperforming after the tech-heavy gauge slumped the most in more than two months on Friday.

The Bloomberg Dollar Spot Index pushed towards the record hit last month as investors sought a haven from spiking volatility. Commodity-linked currencies as well as the yen, the pound and the offshore yuan were under pressure.

Bonds in Europe tumbled, with Germany’s 10-year yield rising above 1.5% after a string of European Central Bank officials stressed over the weekend the need to act more forcefully to quash record inflation. The US two-year yield, sensitive to expectations around Fed policy, hit 3.47% in Asian trading, the highest since the global financial crisis. With UK markets closed Monday, cash Treasuries aren’t trading in Europe.

“We maintain our view that the Fed will raise rates by another 100 basis points by year-end, with risks for more if inflation does not slow in line with our forecasts,” said Mark Haefele, chief investment officer at UBS Global Wealth Management. “With rates likely to stay higher for longer, our base case is for further volatility, earnings downgrades, and higher-than-expected default rates over the course of the next year.”

Powell in his address at the Fed’s Jackson Hole symposium flagged the likely need for restrictive monetary policy for some time to curb high inflation and cautioned against loosening monetary conditions prematurely. He also warned of the potential for economic pain for households and businesses.

ECB officials read from a similar script. Austria’s Robert Holzmann and Dutch colleague Klaas Knot both floated the prospect of an unprecedented three-quarter point hike at their meeting in September. Executive Board member Isabel Schnabel warned that the likelihood of inflation expectations becoming unanchored is uncomfortably high.

Bitcoin broke below the $20,000 level some view as a marker of a deeper slide in investor sentiment. Gold retreated, but oil made gains on supply risks. Meanwhile, European natural gas prices plunged the most since April after Germany said its gas stores are filling up faster than planned ahead of winter.

Here are some key events to watch this week: