The largest cryptocurrency continued to mirror the US stock market, which swung between gains and losses in the wake of the Fed’s first interest rate increase since 2018. Investors have expressed concern that a reduction in pandemic-related stimulus will reduce demand for risker assets.

“Rates going higher will strangle equity markets. So if we see a mass exodus out of risk assets, it’ll weigh on everything, ”said Joel Kruger, a strategist at crypto exchange LMAX Digital. He said a hawkish Fed could push Bitcoin down to $ 20,000. “New lows in stocks could contribute to a decline in crypto assets.”

Bitcoin gained about 3.5% to $ 40,800 as of 4:05 pm in New York. The price had spiked during Asian trading, only to erase gains after the Fed’s decision was announced. Other tokens such as Ethereum and Solana also gained. Bitcoin is down about 12% this year. 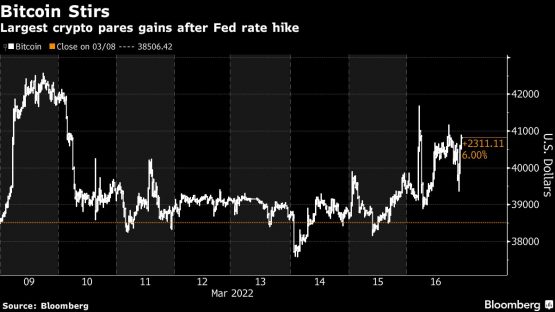 Policy makers led by Chair Jerome Powell voted 8-1 to lift their key rate to a target range of 0.25% to 0.5%, the first increase since 2018, after two years of holding borrowing costs near zero to insulate the economy from the pandemic.

A sustained rally is unlikely while the Fed tightens through the year, billionaire cryptocurrency investor Michael Novogratz who heads Galaxy Digital Holdings Ltd. said Tuesday during a TV interview on Bloomberg Crypto. Bitcoin is likely to stay in a range of $ 30,000 to $ 50,000 in an environment of rising interest rates, he said.

In the Fed’s so-called dot plot, officials ‘median projection was for the benchmark rate to end 2022 at about 1.9% – in line with traders’ bets but higher than previously anticipated – and then rise to about 2.8% in 2023. They estimated a 2.8% rate in 2024, the final year of the forecasts.

Bitcoin had spent the past few days mired in the tightest trading range since October 2020, a phenomenon some market watchers ascribed to long-term holders stepping in to buy whenever the token dips. Meanwhile, selling by short-term investors has kept Bitcoin and other digital assets from mounting sustainable gains.

“Whenever we see stock market relief, crypto tends to do well, especially lately,” said Marcus Sotiriou, an analyst at London-based digital asset broker GlobalBlock. “At the end of the day, the key driving force behind prices is macro, so I expect a struggle for a sustainable uptick.”