Stocks in Asia struggled back from early lows after a tough session for global equities, while oil turned lower as investors assessed the risks of rising inflation and the impact of the war in Ukraine. Treasuries held losses.

An MSCI Inc. gauge of Asia-Pacific equities fell for the first day in three as equities in Japan declined. The Hang Seng erased losses, although Tencent Holdings Ltd. weighed on tech stocks after reporting its slowest pace of quarterly growth on record. US futures edged higher after the S&P 500 erased the prior session’s gains, and European contracts fluctuated.

Treasuries look shaky again, and resumed their slide to unprecedented losses. Investors returned to the market in US trade, snapping up a sale of 20-year bonds and driving the benchmark 10-year yield back to 2.3%. The dollar edged higher.

Oil reversed its earlier advance to trade around $ 113 and barrel amid reports that the US and European Union are close to a deal aimed at slashing Europe’s dependence on Russian energy, while President Joe Biden’s preparations to announce new sanctions on Russia.

The extreme volatility in commodity markets caused by conflict and global response is sapping liquidity, according to some of the world’s largest trading houses. 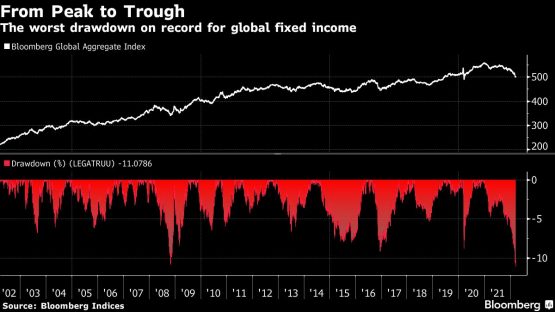 Markets are roiling as Federal Reserve officials signal they won’t shy away from more-aggressive action to tame the fastest inflation in four decades. Commodity prices have staged erratic rallies amid supply pressures and sanctions as Russia’s attacks on Ukraine show no sign of abating, and mounting concerns about the impact on the global economy leave investors struggling to identify havens. A sharp rotation from bonds to equities, which had emerged as an attractive inflation hedge after their steep selloff, may be losing momentum.

“Markets are really latching onto these short-lived themes and that’s causing significant price movement,” Tracie McMillion, head of global asset allocation strategy at Wells Fargo Investment Institute, said on Bloomberg Radio. “We think that for the near term we are probably going to be able to avoid a recession but we are growing a little bit more concerned about 2023.”

She added that some equity investors may be seeing the Fed’s tougher stance on inflation as a positive, at least for now.

Among the latest hawkish messages from Fed officials, San Francisco Fed President Mary Daly said both a 50 basis-point interest-rate hike and a decision to shrink the balance sheet could be warranted at the next policy meeting in May. St. Louis Fed President James Bullard reiterated Thursday that the central bank has to “move faster to keep inflation under control,” speaking at Credit Suisse’s 25th Asian Investment Conference.

“The Fed needs to build up its ammunition,” Teresa Kong, Matthews Asia portfolio manager, said on Bloomberg Television. “Overall global growth is going to be dampened and they need to be able to cut rates later on should this have a greater-than-expected recessionary effect.”

Meanwhile, the Biden administration plans to reinstate exemptions from Trump-era tariffs on about two-thirds of Chinese products that were previously granted waivers, most of which expired by the end of 2020.

European gas prices swung sharply and the ruble staged its biggest one-day gain in years after Russian President Vladimir Putin pushed on with plans to demand that dozens of countries use the local currency for natural gas purchases.